After more than a decade in court, Swiss chocolate maker Lindt has lost its final appeal to trademark its gold foil wrapped chocolate Easter bunny. The German court has decided similar bunny models may also be sold. 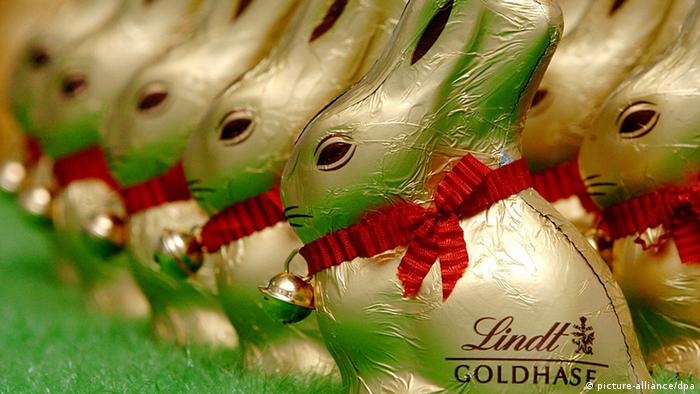 Germany's Federal Court of Justice on Thursday rejected a final appeal by Lindt & Spruengli seeking to establish a sitting Easter bunny model wrapped in gold foil with a red bow tie as a trademark of the Swiss premium chocolate maker.

"The sitting gold-wrapped bunny has been a firm part of our offering for at least half a century," said the head of the family-owned German business, Peter Riegelein, adding that the family was very glad their Easter bunny could finally stay as it was.

The case in Germany's highest administrative court was the fourth and final one Lindt lost in its attempt to win copyright protection of its Easter bunny model. The court had to answer whether it was legally possible to register a product, which was in general use for decades, as a trademark, said Daniel Terheggen, Riegelein's lawyer from Lindner & Blaumeier Attorneys.

"The ruling has set a legal precedent in copyright law with which we are very satisfied," he added.

Confiserie Riegelein was the only defendant left to face up to Lindt in the courts, after a number of smaller chocolate-making firms succumbed to the pressure exerted by the Swiss giant.

Lindt said it was disappointed but would continue to defend its strong brand, a spokesman for the company told SDA news agency.