Corporate losses stemming from copyright fraud in China have been estimated in the tens of billions. The latest replica, an electric Smart Car set enter the market soon, has stirred up legal controversy in Europe. 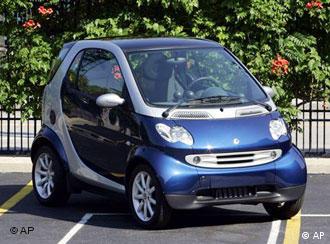 A Smart "fourtwo" two-seater: A fake or the real thing?

Last month, 13 million illegal videos and CDs were destroyed in China as a symbolic rejection of copyright violation. But now it seems that copying has been taken to the next level.

A duplicate version of the Smart fortwo has been produced by the Chinese company CMEC in the city of Suzhou and has already appeared in Hungary and Great Britain. Starting in 2007, it is to be sold for 4,200 euros ($5,250) under the name City Smart.

"When we designed the car we were aware that we might be opening ourselves up to legal action," said Jerry Chen, sales manager for CMEC, which is usually involved in importing and exporting machine tools. "That's why we've imitated the outside but concentrated on making the interior look different."

Not for the freeway 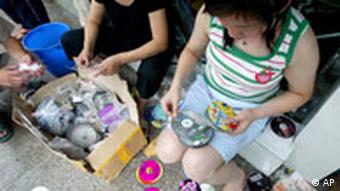 Pirating CDs and DVDs has been common in China

The major difference, however, is not the car's appearance but its engine. It has an electric motor that can only propel the vehicle up to 55 kilometers per hour (34 miles per hour), hence the name City Smart.

The standard petrol-powered Smart fortwo reaches a top speed of 135 kilometers per hour, according to Germany's Autobild magazine.

"We've had electric cars in China for the last 10 years," Chen said. "There's nothing special about the technology any more. It's mainly used for small vehicles like on golf courses, but you can use it in bigger vehicles if you improve the motor."

The Chinese Smart has seven generators instead of just four, he said.

German Smart Car manufacturer DaimlerChrysler is trying to stop CMEC from selling the copycat vehicle and has demanded that its external appearance be changed.

Chen said that alterations have already been made to the front end and trunk. He added that "the entire impression is now very different," though photos that have popped up in recent weeks on Internet forums and Smart-fan sites reveal that the Chinese City Smart is practically identical to its European twin.

Whether or not CMEC's electric Smart will be released on the broader European market will depend on whether or not they are deemed legal. DaimlerChrysler's lawyers are currently looking into what legal steps can be taken.

DaimlerChrysler plans to introduce its own Smart fortwo successor in March 2007. After heavy losses recently, the Smart Car division hopes for a financial recovery with the more comfortable two-seater.

Tiny Smart Car to Challenge Giants in US Market

DaimlerChrysler's midget Smart car will take on the US market in 2008, with executives hoping the nimble microcar can out-manoeuvre rivals in the land of the mammoth sports utility vehicle. (29.06.2006)

Entering the budget car market in Europe, VW is selling its newest model, Fox, for about 9,000 euros ($11,500). The German carmaker is joining a larger group of carmakers trying to attract new customers this way. (02.05.2005)

With total losses since its launch of around €2 billion, DaimlerChrysler's Smart car is turning into the latest albatross around the ailing car giant's neck. A report suggests 2004 was another bad year for the minicar. (14.02.2005)