Chinese ships have entered waters surrounding the disputed islands. Media have also reported a flotilla of about 1,000 Chinese fishing boats en route to the area and further anti-Japan protests in China. 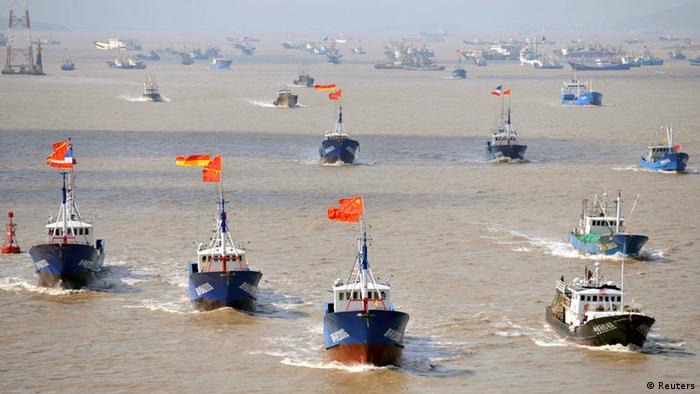 The Chinese government dispatched ships to the disputed island chain on Tuesday after learning that Japanese activists had briefly occupied one of the islands. The two activists left a small boat offshore and swam to the island before returning home.

"The unlawful landing of the Japanese right-wingers on the Chinese territory of the Diaoyu islands was a gravely provocative action violating Chinese territorial sovereignty," Chinese Foreign Ministry spokesman Hong Lei said in a statement. Japan refers to the islands as Senkaku.

Last week, Japan announced that it had completed the purchase of the islands from Japanese private owners.

US Defense Secretary Leon Panetta, in China for unrelated meetings, called for restraint. A strong ally of Japan, the United States has not taken sides in the dispute.

"We reserve the right to take further action, although we hope to settle the issue through peaceful negotiation," state media quoted Chinese Defense Minister Liang Guanglie as saying after he met with Panetta on Tuesday.

Anti-Japanese protests reignited on Tuesday, a day which also marked the 1931 Japanese invasion of Chinese territory. Fearing that the violence could peak during the day, Japanese expatriates shut hundreds of stores and plants across China.

Toyota Motor and Honda have halted some operations as a result of the recent unrest. Other companies have also shuttered plants and stores in China, dropping prices on Japanese shares and causing the credit rating agency Fitch to warn that the cutbacks could have an effect on firms' creditworthiness.

China has also pulled its badminton players out of this week's Japan Open, leaving organizers to redraw the event. A representative of the Table Tennis & Badminton Management Center at General Administration of Sport of China said the body had decided to pull the squad within the past two days, but she did not elaborate.