China: Why is public discontent growing over Shanghai′s COVID lockdown? | Asia | An in-depth look at news from across the continent | DW | 18.04.2022

China: Why is public discontent growing over Shanghai's COVID lockdown?

Experts say rising dissatisfaction with China's "zero-COVID" strategy could make implementation more difficult. Many residents have complained of a lack of food and freedom and voiced fears of a major economic downturn. 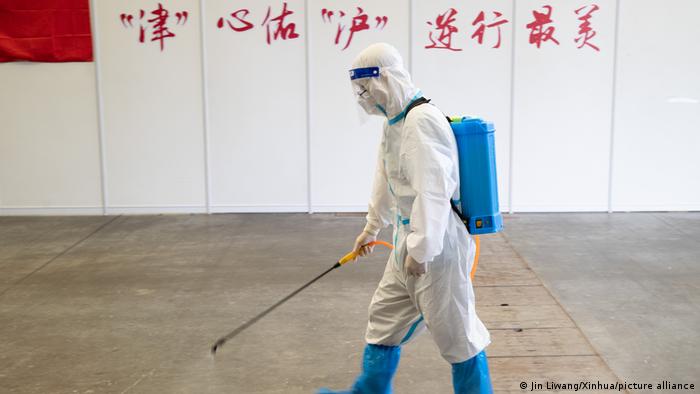 As the lockdown in Shanghai enters its fourth week, the number of new confirmed COVID cases is continuing to rise. On Monday, Shanghai reported 22,248 new local infections and three new deaths. Official records had earlier said that there had not been any COVID-linked deaths since 2020.

Shanghai has recorded more than 320,000 cases since early March, and the city is hoping to stop the spread of COVID outside of the quarantined areas by Wednesday. However, several citizens are opposed to the strict measures that are being implemented in the city, and experts say the growing discontent could create hurdles for China's "zero-COVID" strategies.

The target of stopping the spread of COVID by Wednesday will require local authorities to speed up testing and the transfer of positive patients to quarantine facilities within the week.

"The State Council Working Group, the municipal party committee, and municipal government have asked that the turning point of the epidemic should appear on the 17th and that zero-COVID status should be reached on the 20th," Chen Jie, party secretary of the city's Baoshan district, reportedly said in a speech.

As the number of new cases remains high, some experts are urging China to strike a balance between short-term goals, like quickly clearing infections to maintain zero-COVID, and long-term goals like sustainably returning to normalcy to avoid the loss of economic momentum.

Under lockdown, Shanghai residents upset by lack of food

Many people in the business sector have expressed concerns about the impact of the ongoing lockdowns on China's economic growth. On Monday, China's National Bureau of Statistics reported that the Chinese economy grew 4.8% in the first quarter, but the bureau's spokesperson warned that Beijing needs to be aware of the significant difficulties and challenges that lie ahead. The data released on Monday didn't take the impact of the lockdown in Shanghai into account.

"Of course, the longer the lockdown, the more disruption to the local and national economy and global supply chains, considering that Shanghai is a financial center, the largest port in China, and approaches global manufacturing hubs like Zhejiang and Jiangsu provinces," Chen from Yale told DW.

However, China's Foreign Ministry has defended the events in Shanghai, saying that the anti-virus work is "safe and effective." The comments made by ministry spokesman Zhao Lijian were specifically in response to a US announcement last week that all "non-emergency US government employees" would be withdrawn from its Shanghai consulate, due to the severity of the lockdown.

Public discontent on the rise

Amid the ongoing lockdown, public discontent about authorities' handling of the pandemic continues to rise while more news about tragic deaths of non-COVID patients also begin to surface.

Last week, a video circulated widely on social media, showing local residents at a housing complex in Shanghai clashing with health authorities, as they tried to stop a requisition of their buildings to house quarantined COVID patients. In the video, government staff wearing white hazmat suits pushed people to the ground as other residents could be seen shouting in the background.

While a state-owned development company later claimed in a statement that the buildings had been turned into isolation facilities for confirmed COVID patients, the protest reflects the growing public frustration towards the government's heavy-handed enforcement of pandemic-control measures.

Over the last few weeks, many Shanghai residents have complained about the lack of access to food and basic necessities. A Shanghai resident surnamed Lee told DW that his community has only received one batch of food deliveries from the government since the lockdown began on April 1, and the community's efforts to try to secure more necessities have often ended up in vain.

"Now I basically can't secure any basic necessities through the delivery apps, and prices for supplies like bread and fruits have risen several times since the lockdown began," she told DW. "Many supplies are very difficult to obtain, and if your community doesn't have enough households, the delivery workers usually won't be willing to come. I have to ration the remaining supplies I have."

News about non-COVID patients who died after failing to receive urgent medical care has also flooded Chinese social media platforms. According to an unverified list compiled by Chinese netizens, more than 140 people have died from non-COVID illnesses since the lockdown began in Shanghai.

Meanwhile, the death of a local health official in Shanghai last week sparked widespread outrage towards the amount of pressure that local authorities have had to shoulder as they fulfill the zero-COVID strategy imposed by the central government. "The pressure from the entire machine is all put on a little screw," wrote one netizen on the popular social media platform Weibo.

"You would think that after two years of the pandemic, the Chinese government would have been more prepared for a lockdown. The most surprising thing is how rigid the lockdown in Shanghai is, even though many people know that omicron is not that serious," she added.

Wang thinks the situation in Shanghai over the last few weeks reflects a systematic violation of human rights, and describes the sufferings as "unnecessary."

"This shows that China's system is rigid and opaque, as it doesn't factor medical experts' opinions or people's demands and wishes into their decision-making at all," she told DW.

Even though official media outlets in China continue to defend the government's "dynamic zero-COVID strategy," some experts believe the resistance from Shanghai's civil society, especially from the middle class, is posing serious challenges to the related set of policies.

"Unlike other cities that also experienced lockdowns caused by COVID-19 outbreaks, Shanghai still has the tradition of a civil society, so they are able to stage some small-scale protests against the enforcement of the zero-COVID strategies," said Wu Qiang, an independent political analyst in China. "They still maintain some sense of freedom and some sense of community."

However, Wu doesn't believe the resistance in Shanghai has the capacity to generate any fundamental impact on China's political system, as the experiences during the pandemic only make the middle class in Shanghai want to emigrate abroad, rather than create any changes within the system in China, she said.

"The middle class in Shanghai wants to flee or emigrate because the experiences during the pandemic made them realize that the 'beautiful vision' proposed by the Chinese government is just an illusion," he told DW.

"The lockdown in Shanghai has given the middle class a glimpse of the totalitarian system that is going to be strengthened after the Chinese Communist Party's 20th National Congress this autumn, during which President Xi Jinping is expected to seek his third term," Wu added.