China and Russia have deployed ships and aircraft for the start of their joint military exercise, said to be the largest ever. The move comes amid a territorial dispute between Beijing and Tokyo. 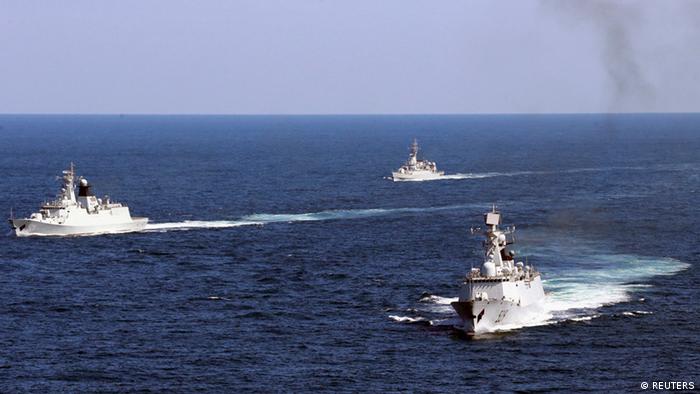 Military vessels stood ready in the waters off of the Sea of Japan on Friday for the launch of China and Russia's second naval drill. The week-long practice military maneuvers came over a year after the two countries' first joint exercise.

Chinese officials billed the event as the "largest military force" that China's navy had deployed for military drills with a foreign partner, according to the official Xinhua state news agency.

It was of great significance to Beijing and Moscow to improve "the capability to jointly address the maritime security threats and highlighting the firm determination to jointly safeguard world peace and regional stability," according to China's navy commander, Wu Shengli. The news agency AFP obtained the quote from the official Chinese Defense Ministry website.

China maintains the largest military influence over the region, seen by some as a valuable ally and by others as a continued threat. During heightened tensions between North and South Korea this year, international leaders looked to Beijing to dissuade North Korea from launching a war.

However, in issues of territorial dispute, neighboring countries, such as Japan, are wary of China's intensions. Over the past year, China has sent naval vessels on numerous occasions to a disputed island chain, called Diaoyu by China and Senkaku by Japan, in the East China Sea. Tokyo has refuted Beijing's territorial claims.

For decades, aircraft carriers have been potent symbols of US military might. But now China has been boosting its own naval capability. Navel expert Alessio Patalano examines the latest maritime strategies in East Asia. (28.06.2013)