China's central bank insists there is no reason for a sustained devaluation of the yuan despite lowering the reference rate three times. Currency and stock markets stabilized on the news. 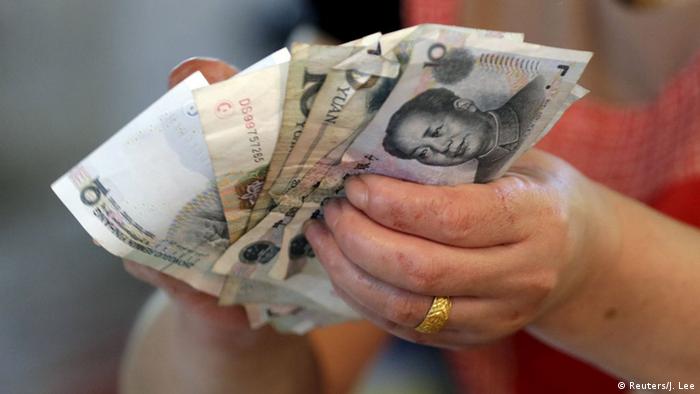 The People's Bank of China (PBOC) lowered the guidance rate for the yuan to 6.4010 per dollar, the third devaluation in a row.

The yuan opened slightly weaker, but deputy central bank governor Zhang Xiaohui's reassurance that he saw "no basis for persistent and substantial devaluation" of the currency calmed currency and stock markets.

At a news conference in Beijing, he also said that the yuan - also known as the renminbi - was close to "market levels" after two days of substantial declines.

Alarmed by a slew of weak economic data, the central bank unexpectedly devalued the yuan by nearly 2 percent on Tuesday, sparking turbulence on the currency and stock markets.

The yuan's decline was small compared with fluctuations of freely traded currencies. But after a decade of little or no movement, the change rattled financial markets who feared China might be prepared to engage in a currency war with the US and Europe.

The US has, in the past, sharply criticized China for keeping the value of the yuan artificially low, thus propping up its exporters at the expense of their US counterparts.

The managing director of Germany's Chambers of Commerce, Martin Wansleben, also warned Wednesday of a "global competition for the lowest currency that would be harmful for everyone involved."

Today's central bank comments notwithstanding, many observers believe China intends to devalue the currency further, as it has changed the way it sets the daily guidance rate, marking the "start of an engineered depreciation," according to a research note by Mizuho Bank.