One of China's most wanted fugitives has turned herself in after more than a decade hiding out in the United States. Her return to China comes amid a government campaign to catch corrupt officials who have fled overseas. 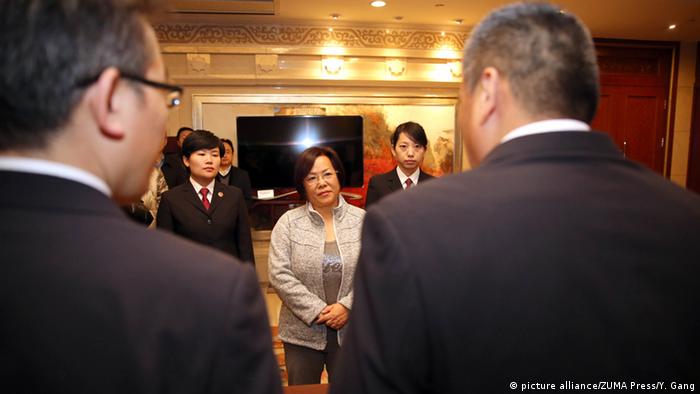 China's ruling Communist Party said Huang Yurong surrendered to authorities at Beijing's Capital Airport on Saturday. The former highways agency boss in the central province of Henan is accused of using her position to embezzle funds and take bribes. She fled the country in 2002 and had been residing in the US for the past 13 years.

The government's anti-graft body, known as the Central Commission for Discipline Inspection, said Huang had returned voluntarily after "persuasion" by Chinese officials and with cooperation from Washington. She was ranked No. 4 on a list of China's 100 most wanted suspects that was issued in April.

The commission quoted Huang as saying she "believes that her choice of returning to the motherland is right" and "promises to cooperate with judicial departments."

Since taking office in 2013, Chinese President Xi Jinping has launched a wide-ranging crackdown on corruption, including a push to capture officials who have fled abroad. In some cases agents are dispatched to find fugitives and try to persuade them to return.

The US, Australia and Canada are among the most popular destinations for Chinese officials, mainly because they do not have extradition treaties with Beijing. Many Western countries have shied away from such an agreement over concerns about China's legal system. Rights groups say the use of torture to extract confessions is not uncommon and that the death penalty is often handed down in corruption cases.

The Central Committee of China's ruling Communist Party has gathered to map out the direction of the country's economic and social targets. The congress comes amid growing concerns over China's slowing economy. (26.10.2015)

The US has extradited one of China's most wanted fugitives suspected of graft and bribery. The extradition, the first prominent case in a decade, comes as the Chinese president prepares for a weeklong visit to the US. (18.09.2015)

US warns China on agents pressuring expatriates to return home

American officials say China has been warned over a secret agent operation to pressure expatriates to return home. "Operation Fox Hunt" is part of a global campaign looking for China's economic and political fugitives. (17.08.2015)