Cheers, tears and blood at Barcelona′s final bullfight | Europe | News and current affairs from around the continent | DW | 25.09.2011

Catalonia's ban on bullfighting soon comes into effect, and fans of the Spanish tradition have flocked to the final fight to say their goodbyes. But supporters of the "corrida" hope to bring the fight back some day. 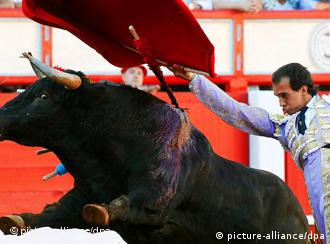 Three of Spain's top matadors perform at Barcelona's Monumental arena on Sunday in the last bullfight before a ban on the practice takes effect in the autonomous Catalonia region.

The arena expected a sold-out crowd of 20,000 as fans of the bloody tradition sought a chance to witness the farewell fight between man and bull. The ban in the northeastern region takes effect January 1, 2012.

The bullfight, called a "corrida" in Spanish, opens with 38-year-old Juan Mora, followed by Spain's top matador, 36-year-old Jose Tomas. The battle involves first lancing the bull behind the neck to drop its head; planting sharp, barbed sticks into its shoulders; running the bull around the ring with stylized passes to tire it; and finally plunging a steel sword deep between the animal's shoulders to kill it. 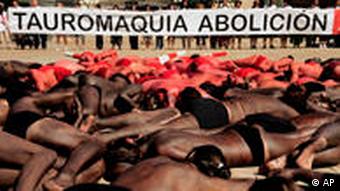 Campaigns to ban the practice have gained momentum

"I feel bad about it, sad," Marin said of the ban. "They take away all your past and part of your future."

Rejection of all things Spanish

Marin said he agreed with pro-bullfighting activists in Catalonia that the campaign was more about asserting Catalan independence from Madrid than about animal rights.

While the popularity of bullfights remains high in much of the rest of Spain, it has been declining in Catalonia since the death of longtime dictator Francisco Franco in 1975. His fascist regime suppressed the region's distinct language and culture, and the rise of Catalan nationalism since then has paralleled a growing pushback against many aspects of the dominant Spanish culture.

Dozens of municipalities in Catalonia had already passed declarations condemning the bullfight when the regional parliament voted in July 2010 to approve the ban.

"Banning bullfighting in Catalonia is nothing more than an attack on liberty," said Carlos Nunez, president of Spain's pro-bullfighting umbrella group Mesa del Toro. "It's the fruit of policies in Catalonia against bullfighting and all that is seen to represent Spain."

But anti-bullfighting campaigner Soraya Gaston said the attack on the ban campaign was politically motivated. 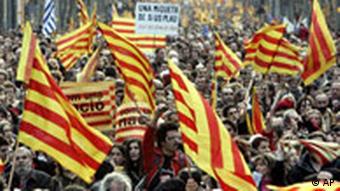 As Catalan nationalism has risen, the popularity of the bullfight has dropped

"Obviously a lot of political parties have tried to politicize this, but we mustn't forget that this popular proposal sprouted from a pure pro-animal rights standpoint aimed at eradicating animal cruelty," she said.

Pro-bullfighting activists have not given up. They are seeking the 500,000 signatures needed to petition the national parliament to protect the tradition by giving it official cultural heritage status.

But animal rights activists are the ones celebrating at the Monumental, planning a "funeral toast" for the corrida.

Helena Escoda, member of the rights group Prou!, Catalan for "Enough!" and which spearheaded the anti-bullfighting campaign, said she knew the fight was not over.

"We have won a battle but not the war," she said. "We will continue to work for animal rights in Spain, Catalonia and elsewhere."

Catalonia's center-right nationalists have won a convincing victory over the ruling Socialists in regional elections. The poor showing for the left is a bad sign for Spanish Prime Minister Jose Luis Rodriguez Zapatero. (29.11.2010)

As the Spanish city of Bilbao prepares for bullfighting season, animal rights activists stripped naked in protest outside the city's iconic Guggenheim museum. (22.08.2010)

Catalonia has voted to ban the centuries-old practice of bullfighting. Supporters of the ban say it is a victory for animal rights, but some opponents say the ban has more to do with politics than animal cruelty. (28.07.2010)