There are conflicting reports about the shooting, which happened during a second night of unrest in Charlotte, North Carolina. Police used tear gas and rubber bullets to disperse angry demonstrators. 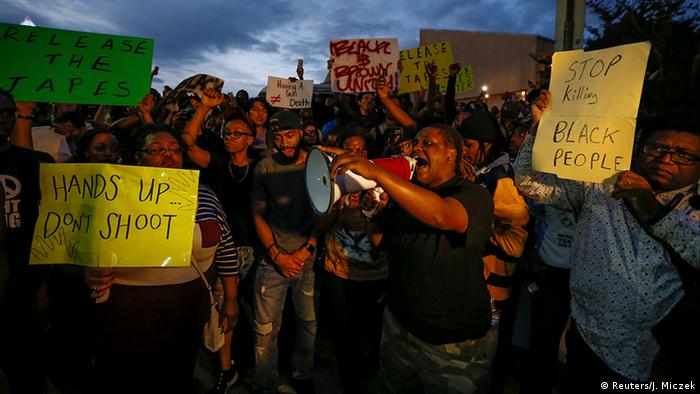 Charlotte city officials confirmed that a man suffered gunshot wounds during Wednesday evening's protests, and was on life support and in a critical condition.

They contradicted an earlier report that the man had died from the shooting incident, which happened when a peaceful rally against the fatal police shooting of a black man on Tuesday turned violent.

Police officials said the latest shooting victim had not been wounded by a police officer.

North Carolina governor Pat McCrory later declared a state of emergency in Charlotte due to the unrest, a statement from his office said.

Wednesday's protest got out of control after several hundred demonstrators approached a downtown intersection and began to surround and taunt groups of police and their patrol cars.

Some protesters banged on glass windows, others threw objects at police and stood on cars as police fired tear gas and rubber bullets, prompting demonstrators to run. Protesters were also seen looting a convenience store after smashing its windows.

Seven law-enforcement officers and one civilian were also taken to hospital for injuries sustained during the protests, city council official Kenny Smith said.

The trigger for the violence was the killing of Keith Lamont Scott on Tuesday, who was shot dead in an apartment complex car park. The 43-year-old had been stopped by officers searching for a suspect.

Police said Scott was armed and ignoring officers' orders when he was gunned down, while the victim's family and a witness said he was holding a book, not a weapon.

Within hours of his killing, protesters had taken to the streets, clashing with police in riot gear. Sixteen officers were injured late on Tuesday and early Wednesday.

Authorities have not released any video of the incident, but the city's mayor said they plan to do so.

Keith Scott's shooting and protests through the Facebook lens

The witnesses of Keith Lamont Scott's death in Charlotte used Facebook Live to tell two stories of a police shooting: One of a grieving family and angry activists, and that of a protest gone wrong. (21.09.2016)

A dozen police officers and some civilians have been injured in a demonstration in the North Carolina city of Charlotte. They were protesting the shooting of an African-American man by a police officer. (21.09.2016)

Police release a video showing 40-year-old Terence Crutcher being shot and killed by officers arresting him. The footage offers little clue as to why they downed the man, who appeared to be cooperating. (20.09.2016)