The dire predictions once made about Germany's current "grand coalition" government have proven untrue. On the contrary, harmony is the watchword so far. Political scientist Klaus Detterbeck looks back and ahead. 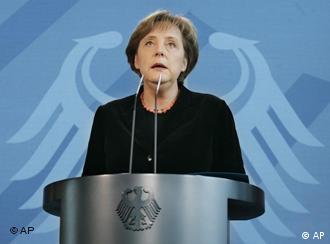 Merkel has been enjoying good press from journalists of all stripes

DW-WORLD: The grand coalition's grace period -- its first hundred days -- is now over. One gets the impression that the government has made a better impression than was once expected.

Klaus Detterbeck: I think so too. Surveys regarding Angela Merkel and the Christian Democrats are good right now. There are two reasons for this relatively good start for the grand coalition. First, there have been successes, like Chancellor Merkel's trip to the US, to Russia and at the EU summit, as well as some overall positive economic developments. Secondly, the populace has given the chancellor something of an advance when it comes to trust. People are willing to give this coalition some time to find its footing. A majority of people have the feeling that a solid, capable team is at the helm, as opposed to that of the last Schröder government.

So are the individuals in the government less important than the "team" as a whole?

Yes, you could say that. That has to do with Chancellor Merkel's role as a director. She is not a big personality out front, who calls all the shots. Rather she's the person who steers the entire team. That makes her different than Schröder, who was something of a showman who pranced on the political stage.

Despite the laurels, has the country really progressed toward finding solutions to some of its problems?

It's true that there have been no big decisions made as yet. There is this positive impression, a positive undertone, but the real foundation for new policies hasn't yet been laid. Negotiations still have to take place about federalism reform, and other big reform projects have yet to be tackled.

Angela Merkel enjoys a good deal of sympathy from journalists of all stripes. She is also respected by foreign leaders. What is different about her? 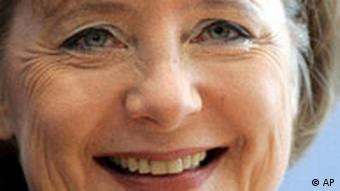 Popular with journalists these days

She leaves the impression of being someone who does solid work and doesn't push her way to the front. Instead, she tries to enact good policies for the good of the country. In the grand coalition, she is engaging in the politics of inclusion. That's to her great credit.

Will she be successful if she continues to follow this strategy? What about when she has to get down to the nitty-gritty?

One of her strengths is her ability to hold the two camps together. But in fact, this advantage could turn into a disadvantage if it comes time to make difficult decisions and she finds it hard to assert her authority, depending on a consensus for decisions.

The Social Democrats (SPD) have lost popularity among voters. Does the party have the wrong party chairman or is its strategy faulty?

The SPD has two problems. For one, they have the rather "unpleasant" ministries: (Franz) Müntefering at Labor and (Peer) Steinbrück at Finance. On the other hand, people still aren't sure what this party actually stands for. Is it a reform party, which is how it's been seen over the past few years under Schröder? Or is it headed back in a more traditional, union-oriented direction? (Matthias) Platzeck is still not in the position to explain where the party should go from here and it's hurting because of that.

Let's look at the opposition. Does one actually still exist and if so, is it able to attract any attention to itself?

It's true that the opposition parties have problems finding an audience. The Left Party is mostly concerned with itself these days; the Greens haven't found their direction yet; and the Free Democrats are having a hard time making their mark. These are tough times for the smaller parties. We'll have to see how they do at the end of March, when there are elections in Rheinland-Palatinate, Saxony-Anhalt and Baden-Württemberg.

Political scientist Klaus Detterbeck teaches at the Institute for Political Science at the University of Magdeburg.

Applause for her performance abroad, doubts about what's to come at home -- European editorial writers were kind in their reviews of Angela Merkel's first 100 days in office, but fear the honeymoon could soon end. (March 1, 2006)

Angela Merkel gave her first speech to parliament as German chancellor Wednesday and spoke of a strong Germany full of opportunities and a country that would stand firm on the issues of justice and equal rights. (Nov. 30, 2005)