In the customary New Year's address to the nation, Chancellor Angela Merkel called for courage and togetherness in the year ahead. This is the full text of her address translated into English. 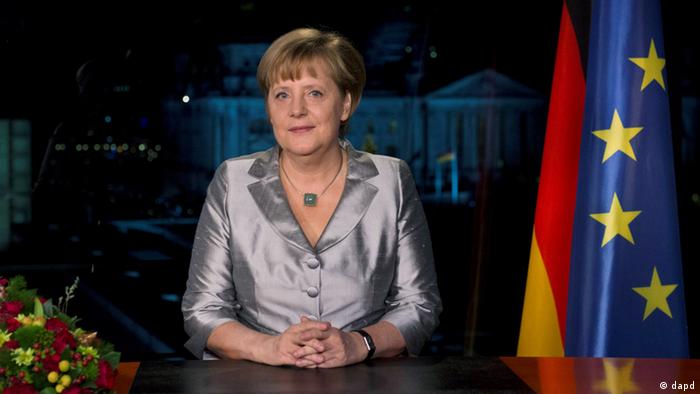 Fifty years ago, the New Year's classic "Dinner for One" was recorded in Hamburg. There was the inaugural match of the Bundesliga. The German inventor and television pioneer Walter Bruch unveiled his PAL color television system.

The 50th anniversary of 'The 90th Birthday'

It was also 50 years ago when American President John F. Kennedy said his famous words in Berlin, divided by the Wall: "Ich bin ein Berliner."

In the same year France and Germany, Charles de Gaulle and Konrad Adenauer, signed the Elyse Treaty. They demonstrated the wish of the two peoples to be reconciled after two terrible world wars.

In the beginning, there are often only a few people who are willing to lay the groundwork to get things moving and make change possible. "Whoever exhibits courage inspires courage." - This quotation by social reformer Adolph Kolping makes this clear.

Today there are still many brave and helpful people in our country. At one of my discussion sessions with the public, in Heidelberg, a young participant told me that a player on his soccer team wanted to quit school. He then went to his coach and asked him to call the whole team together, so that everyone could say why it's good to go to school. They did so at the next practice, and that worked. The player stayed in school.

This is just one of many stories that are not in the least spectacular, but still show how we can pull together.

There are friends and neighbors who take the initiative or put problems right. There are the families who provide loving care for their children and their family members every day. There are trade unionists and entrepreneurs who work together to ensure job security.

These people and many others like them make our society compassionate and successful. In this way it became possible this year for us to have the lowest unemployment rate and the highest labor market participation since reunification.

For hundreds of thousands of families, this means having a safe future and earning recognition.

And for our young people this means security, an education, a job and thus a good start in life.

Yet I know that many are also heading into the new year with trepidation. And indeed, the economic environment next year will not be easier, but more difficult. That should not discourage us, but - on the contrary - serve as an incentive.

I would like to tell you about two small medical miracles: I recently met a 10-year-old boy who was born almost deaf. Then he received a highly advanced implant. Today, he can listen to music and go to school without problems.

I also met a young woman who has lived for three years with a replacement heart valve that is growing with her. It means she can play sports and lead a normal life.

These are small medical miracles. They are marks of our researchers' success. For this boy and this woman, research means hearing, or a heartbeat. It means daily life and quality of life.

For our country, research means jobs. If we can do something that others cannot, we preserve and create prosperity.

We need the right balance for our prosperity and our cohesion. We need a willingness to achieve as well as social security for all.

The European sovereign debt crisis shows us how important this balance is. The reforms we have agreed to are beginning to take effect. But we still need a lot of patience. The crisis is far from over.

More needs to be done internationally, as well, to monitor the financial markets. The world has not sufficiently learned the lesson of the devastating financial crisis of 2008. For never again must such irresponsibility be allowed to take hold as it did then. In the social market economy, the state is the guardian of order, and the public must be able to place its trust in it.

At this hour in particular we should think about those who ensure our security, both here at home and far away.

They are our soldiers, police officers and civilian helpers who do their job for us at great personal sacrifice. I know from my conversations with them, how much it means to them when we at home think of them. I especially want to express my thanks to them tonight.

Our confidence for the coming year may take sustenance from a saying of the Greek philosopher Democritus. He said: "Courage marks the beginning of action, fortune the end."

In this spirit, let us in 2013 continue to share the burden of those who are facing difficulty, people who are lonely or sick or in need of comfort.

Together, let us make the New Year one in which we again put our greatest strengths to the test: our togetherness, our continued capacity for new ideas that gives us economic power. Then Germany will continue to be compassionate and successful.

And so I wish you and your families a healthy, fulfilling and happy new year 2013 and God's blessings.