From drones and robots to jewelry, appliances and TVs, the new technology on display at the 2016 Consumer Electronics Show promises to be smarter than ever. But the real stars in Las Vegas this year have wheels. 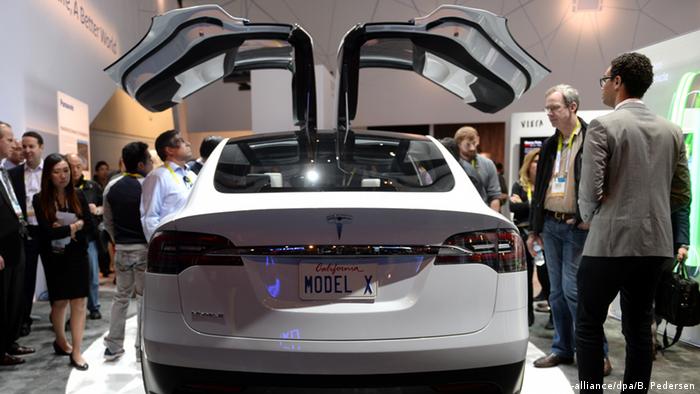 There are new concept cars by Volkswagen, General Motors, Tesla and Ford on the horizon - and they all have one thing in common: They will all premiere at the Consumer Electronic Show (CES), which runs from January 6 to 9 in Las Vegas. For years manufacturers have been packing more electronics into their latest models and for years the CES has been the stage for new gadgets like automated driving concepts and WiFi connections to link a car's computer with a smartphone.

This year electric cars will play a major role at the Las Vegas show. General Motors is expected to present a smaller and less expensive version of the Chevrolet Bolt in the American gaming capital.

It appears that Volkswagen will present an electric VW microbus at CES 2016. That could help repair some of the damage to the German maker's image caused by a diesel engine emissions-rigging scandal that broke last September. The Wolfsburg giant has been tight-lipped about the new vehicle, but teaser photos show a tall, boxy shape under the dust wraps with a prominent VW badge on the front. Car magazines in- and outside Germany say the vehicle will be the long-awaited successor to the iconic VW bus that Volkswagen fans have been hoping for for years.

"Volkswagen will present a completely new concept car at the CES to illustrate the major changes that the car is set to go through in the next few years," said a company statement.

Britain's Autocar magazine says the electric bus is not very different from a production vehicle being developed for introduction in 2017, expected to go on sale in petrol, diesel and electric versions.

Faraday Future is the interesting new kid on the bloc, when it comes to electric cars. The Los Angeles-based company was founded by four former Tesla top employees and the previous head designer of BMW's electric i-models. Backed by Chinese billionaire Jia Yueting, Faraday Future currently has 400 employees, but is planning to build a brand new production facility in the US state of Nevada with a workforce of 4,500.

But the company is not just working on the production of electric cars: The brains behind Faraday have announced they'll unveil new concepts for tomorrow's electromobilty at the CES. 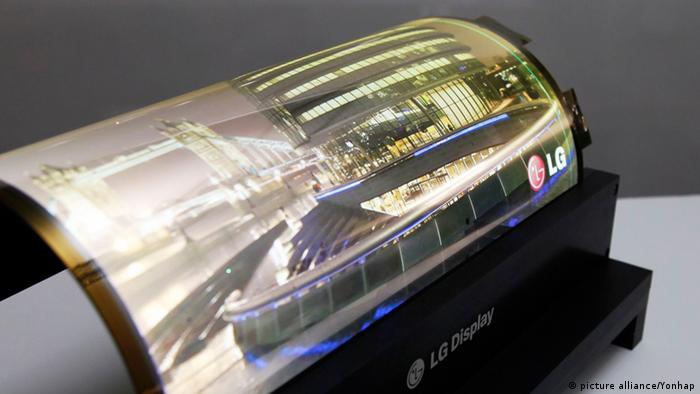 One of LG's flexible OLED screens

"Since electric cars and autonomous driving have been in the making, people expect more from their vehicles", said Volker Zota, editor with Germany's computer journal "ct".

"Cars are no longer just a thing you dump gasoline into in order to drive. There is definitely a trend towards high tech. It started about ten years ago: Cars are more and more evolving into driving computers," Zota added.

The TV set in command

Every appliance will be online in the future - that's one of the key messages of CES 2016. The annual tech show at the Las vegas convention Center has more than 3,600 exhibitors this year. It's set to formally open on Wednesday. It'll showcase innovation across a range of sectors, from health care to connected homes, virtual reality and gaming. Hundreds of new products will be presented.

Many of them will be connectable to the web and to each other. For example, Samsung is set to introduce a smart fridge with an integrated touch screen that covers half of one of the refrigerator's doors. The South Korean manufacturer's new Ultra-HD television sets are designed to be command centers of the connected home.

"In the future, my TV set could tell the coffee maker to start brewing a new pot, because the movie I'm watching right now will soon be over", ct editor Zota said. However, as most manufacturers are betting on cloud computing, privacy groups have mixed feelings about the interconnected home of the future.

"Cloud services have proven to have security holes as numerous as the bubbles in Swiss cheese", added Zota. "It'll be a challenge to develop solutions to connect me with my home, without handing over sensitive data to a cloud service or others over the internet."

From wearables to smart drones

Electronics makers are building smart technology into all manner of devices, allowing them to adapt to how people use them - by responding to voice or gesture, for example. 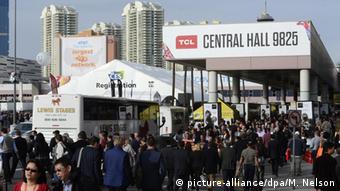 But the trend of once-dumb devices getting smarter will continue to include not only light bulbs, remote controls, thermostats and other devices in the home. Experts are also counting on seeing a lot of wearables and other smart clothes this year.

Apple does not officially attend CES, but smart household products tuned to the technology giant's HomeKit and controlled by iPhones are expected to be plentiful.

Samsung and Google-owned Nest are also expected to make moves to be at the center of smart homes, where the market is vexed by the lack of a single standard or system for devices to trade data and commands with each other.

LG is also planning to highlight another display that can show two separate images on its two sides, and new curved panels for the car industry.

Delivery drones that know how to avoid sensitive airspace around airports and military installations are another highlight of this year's CES.

Each year, hundreds of companies present their latest ideas and concepts at the Consumer Electronics Show. Some of them could become the next big thing, while others are likely to never go to market.

"The CES carries great weight", says ct editor Volker Zota. "The entertainment sector and also the auto industry hope to get new ideas for the coming year in Las Vegas".

With more industry sectors covered, more visitors travel to Nevada each January to attend the CES. Plans to expand the city's exhibition space are already underway. Until then, exhibitors have to improvise and use conference space in the gaming city's numerous hotels.

But this means the streets of Las Vegas are even more congested, and there are long lines to access public transportation. So after an increase of 11 per cent in attendance in 2015, this year the number of visitors will be limited to a maximum of 170,000.

A finger ring that snaps pictures and plays your favorite tune, or a 110-inch curved TV: Exhibitors at the CES are locked in a race to amaze electronics consumers. But this year, it's cars that are stealing the show. (07.01.2015)