The Czech Republic's center-right coalition government teetered on the verge of collapse over the weekend, as it sought to scrape together a parliamentary majority in the face of massive anti-austerity protests. 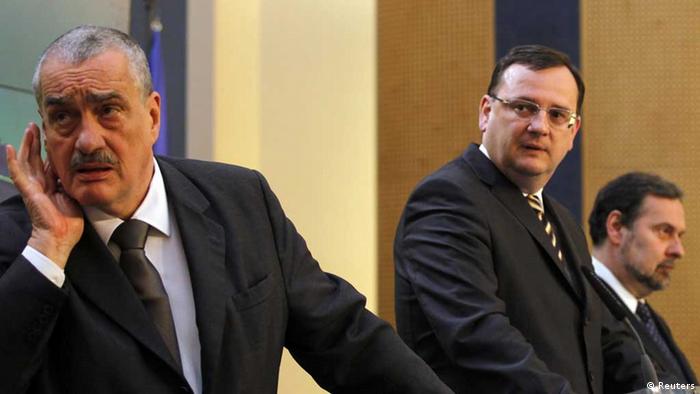 The Czech Republic's prime minister announced on Sunday that his center-right coalition had agreed to dissolve itself, after the smallest party in the coalition government split into two factions.

Prime Minister Petr Necas' three-party coalition - Civic Democrats, TOP 09 and Public Affairs - had 118 seats in the 200-seat parliament, but is now struggling to scrape together a simple majority following the division of Public Affairs, the coalition's junior member.

The split came earlier this week when Deputy Prime Minister Karolina Peake left Public Affairs and decided to form her own independent political platform, throwing the coalition government into turmoil. Public Affairs has been rocked by scandal, with one of the party's influential leaders - Vit Barta - having been convicted of paying bribes. He was given an 18-month suspended prison sentence this month.

Prime Minister Necas has given Peake until Monday to find support to secure the cabinet a majority, saying that early elections - likely in June - would be the only alternative.

"The more Public Affairs lawmakers move to (Peake's) platform, the bigger the chance of a stable government and the lower the probability of early elections," Necas told the CTK news agency on Sunday.

The embattled center-right coalition also faces growing public dissatisfaction over tax hikes, spending cuts as well as corruption. Between 80,000 and 90,000 people protested in Prague on Saturday against the austerity measures, according to police estimates.

Early elections would likely result in the opposition Social Democrats seizing power from Necas's Civic Democrats. The Social Democrats, who have promised to reverse many of the current government's reforms, currently have a near 20-point lead in the polls.