Germany has a total population of 80.2 million people - about 1.5 million fewer residents than had been estimated. This was the main finding of Germany's first census since reunification more than two decades ago. 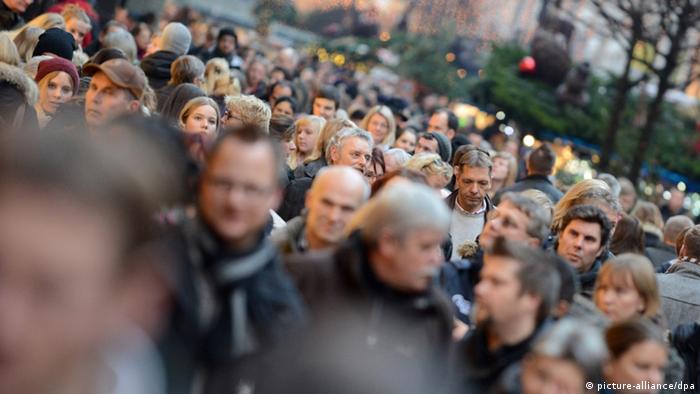 The figures were unveiled by Roderich Egeler, the president of the Federal Statistical Office, at a press conference in Berlin on Friday.

Prior to the new census, which used data from surveys conducted in the weeks leading up to a deadline in May 2011, German authorities had utilized projections based on studies conducted in the former West and East Germanys prior to reunification in 1990.

The last census in the Federal Republic of Germany, or West Germany, was conducted in 1987, while the last such survey conducted in the German Democratic Republic or communist East Germany dated back to 1981. The projections derived from these figures were thought over time to have become increasingly erroneous.

A total of 15 million people or 19 percent of the population of Germany in May 2011 were persons with "migrant backgrounds."

Census gets too personal for some Germans

In Germany's first census since reunification, state officials are walking door-to-door in an effort to learn more about the country's people and society. For some, the obligatory questions are a bit too personal. (14.05.2011)

This definition applies to a resident who has entered the territory that now makes up the reunited Germany after 1955 or who has at least one parent who did so since then.

Just under 6.2 million inhabitants, or 7.7 percent of the population, had foreign nationality in 2011.

Among Germany's 16 regional states or Länder, Hamburg had the highest percentage of people with migrant backgrounds, with 27.5 percent falling into this category.

In each of the five eastern states of what was the former communist East Germany this figure is below five percent.

While the eagerly awaited figures will have satisfied the curiosity of both the media and the general public, they can also have serious implications for how reunited Germany is governed.

Census figures that demonstrate population shifts can lead to changes in transfer payments between the federal government, the states and municipalities, reflecting increases or decreases in the number of people living in any given jurisdiction.

Fresh statistics can also be used to redraw the boundaries of electoral districts in an effort to make voting more fair after population shifts.