Zoologists say they have found a "ghostlike" octopus - apparently an entirely new species - living near the Hawaiian islands. The "remarkable" discovery so deep beneath the waves has raised new questions for biologists. 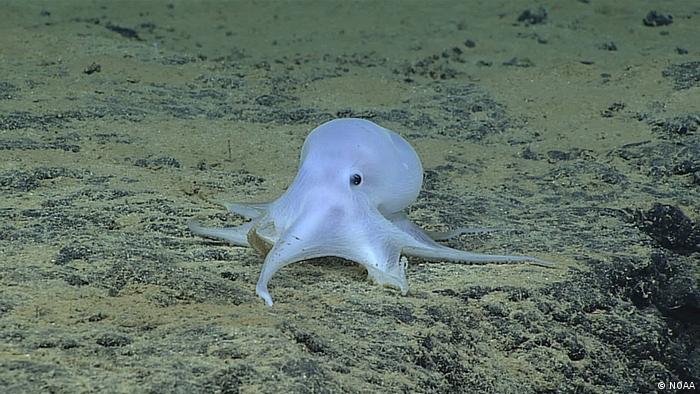 The remotely operated vehicle Deep Discoverer captured footage of the octopus as part of a mission gathering ocean floor data off the Hawaiian island of Necker.

The find was made as the vehicle - primarily engaged in a geological survey - crossed a flat rocky area at a depth of 4,290 meters (almost 2.7 miles).

"It came across a remarkable little octopod sitting on a flat rock dusted with a light coat of sediment," said zoologist Michael Vecchione, from the National Oceanic and Atmospheric Administration (NOAA).

"The appearance of this animal was unlike any published records and was the deepest observation ever for this type of cephalopod."

In #link:http://oceanexplorer.noaa.gov/okeanos/explorations/ex1603/dailyupdates/media/video/dive_1/ex1603_dive1_022716.html: a video posted by the NOAA# on its website, scientists speculated that the animal belonged to a species never seen previously.

The animal lacked the pigment cells that are typical of most cephalopods. "This resulted in a ghostlike appearance, leading to a comment on social media that it should be called Casper, like the friendly cartoon ghost. It is almost certainly an undescribed species and may not belong to any described genus."

In addition, the octopus "did not seem very muscular" and did not have fins, said Vecchione.

While the animal's translucent appearance was notable, the absence of fins was perhaps the most surprising detail for zoologists. Such depths are only normally inhabited by finned cirrates, also known as "dumbo" octopods.

Vecchione said the data would be combined with observations from a German cruise in the eastern Pacific ahead of a published study on the subject.

a video posted by the NOAA