Carmakers torn between present and future | Business | Economy and finance news from a German perspective | DW | 12.01.2015

Carmakers torn between present and future

The North American International Auto Show in Detroit is the new year's first major fair for carmakers. But it's come under pressure from the Las Vegas electronics show, a hub of futuristic car technology. 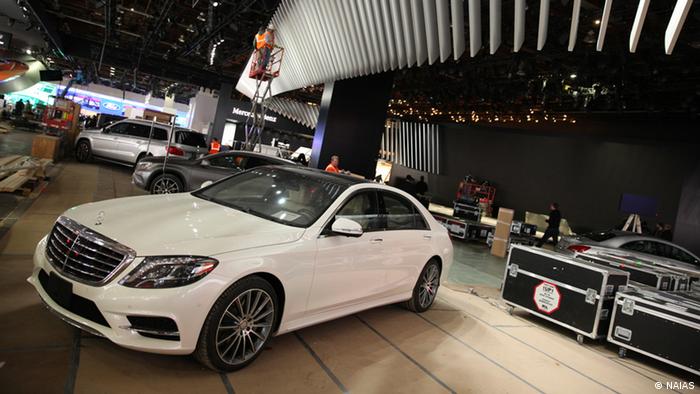 As carmakers gather for the North American International Auto Show in Detroit, many will still feel the aftershock of the Consumer Electronics Show in Las Vegas, which saw auto giants such as Mercedes, GM and Audi unleash their vision of the not-too-distant future.

Their aim is to flood the roads with driverless cars between 2016 and 2020. That leaves little time for the ink to dry as contracts to supply both hardware and software for the fleet of the future will have to be signed now.

During an industry conference in Detroit, people from Google's autonomous vehicle project are scheduled to announce their resolve to forge strategic partnerships with traditional auto makers and suppliers to get Google's technology on the road.

There's no denying that car producers are currently doubling down on efforts to move into a higher gear technologically as many major players want to leave their mark on the car of the future.

But so far, there's disagreement as to what that car should look like or should be able to do. New industry standards still need to be sorted out as companies compete to make their vehicles smarter and safer and bring them to market as fast as possible.

A fresh study by the Boston Consulting Group maintains that fully automated driverless cars could make up almost 10 percent of global vehicle sales by 2035. And despite the extra costs involved, 44 percent of respondents in the US said they'd consider buying fully autonomous vehicles within the next 10 years.

In Germany, 41 percent of car owners said they would like their next set of wheels to drive themselves, according to a 2014 study by market research firm Gartner.

Gas guzzlers back with a vengeance

But while carmakers put on a flashy, futuristic show in Las Vegas, it's bound to be a bit more down-to-earth in Detroit. Industry executives there will have to explain where they'll find the money to develop the technologies needed for the next-generation cars.

After all, selling cars is their main source of income. But given Europe's continuous debt problems and slowing growth in a number of pivotal emerging economies, driving up sales is likely to pose quite a challenge in many markets this year.

Whoever wants to make big money needs to be well-positioned in China and the US.

China has become an increasingly difficult market, including for German auto makers. Volkswagen logged stagnating sales figures towards the end of last year and BMW had to agree to pay hundreds of billions of euros to Chinese car dealers in compensation for what authorities there believe to be unrealistically high sales targets imposed by the Munich-based company.

On the US market, fortunes have proven to be kinder, with Daimler, BMW, Porsche and Audi all hoping to see another successful year after raising their market share from 5.4 percent to 5.6 percent in 2014.

And as things are at the moment, low fuel prices and a stronger US economy are playing into the hands of sales people active in the world's largest economy. It's no surprise, then, that powerful sports cars and gas guzzlers like SUVs and pickup trucks are featuring heavily at the Detroit show.

If the driver doesn't brake, the car will

Bike helmets are the best way to prevent head injuries. A special one is now in the making, which connects road users on the cloud. It's being unveiled at the CES in Las Vegas - Volvo's Klas Bendrik tells DW more. (07.01.2015)