German premium car manufacturer BMW has announced it will spend hundreds of millions of euros on a new battery cell competence center. The company wants to have more options should e-cars hit the mass market. 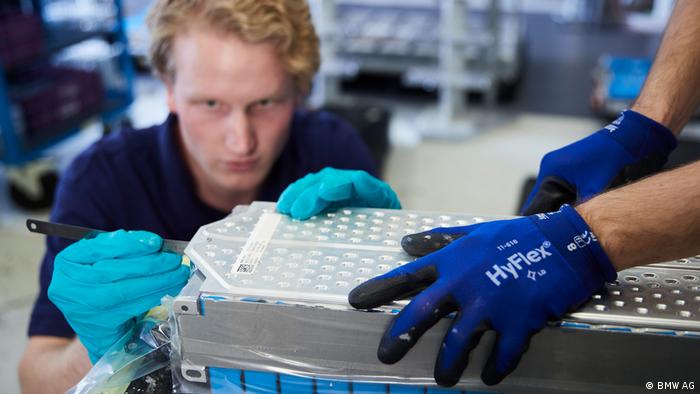 BMW will bundle its battery cell expertise in a new competence center in Munich. At a ground-breaking ceremony Friday, the carmaker said it would invest €200 million ($237 million) in the site over the next four years.

"By producing battery-cell prototypes, we can analyze and fully understand the value-creation process behind it," BMW board member Oliver Zipse said in a statement. "With this built-to-print expertise, we can enable potential suppliers to produce cells according to our specifications."

"The knowledge we gain is very important to us, regardless of whether we produce the battery cells ourselves or not," Zipse added.

Right now, German carmakers buy battery cells abroad. BMW for instance gets them from South Korea's Samsung conglomerate for its plug-in hybrid vehicles and its all-electric i3.

From today's point of view, it would make little economic sense for BMW to have a battery factory of its own. But it wants to keep all strategic options open should mass production actually get off the ground as of 2021.

Suppliers Bosch and Continental are both considering building such a plant, but Germany's high energy prices seem to have dampened their enthusiasm. Continental reckons it would cost around €3 billion to build a factory capable of making half a million batteries for e-cars annually.

Strong vehicle sales in the world's most important car market have been essential in enabling German carmakers to end their third quarters on a positive note. Their dependence on China is expected to increase further. (21.11.2017)