At least seven people have died after a car bomb exploded in the eastern Syrian city of Deir Ezzor. Dozens more were injured. Syrian state television reported the attack was carried out by a "terrorist suicide bomber." 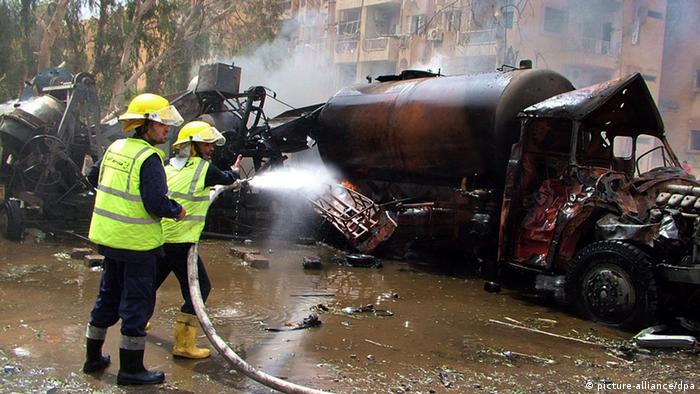 The Syrian Observatory for Human Rights confirmed reports on Saturday of an explosion in the Ghazi Ayyash neighborhood of the eastern Syrian city Deir Ezzor.

The site of the blast, which killed at least seven people and injured 100 others, was close to the city branches of the Military Intelligence Directorate and Air Force Intelligence, the London-based activist group reported.

"A booby-trapped car exploded in a street where a headquarters for the Syrian army intelligence and a military hospital are located," it said.

Meanwhile Syria's state television reported that the attack was carried out by a "suicide terrorist bomber" and caused "widespread material damage." It added that there were casualties but did not elaborate on numbers.

The pro-government station broadcast footage of damaged buildings and vehicles in the vicinity, as well as a large bloodstain on the ground. Amateur videos posted online showed thick black smoke rising from the city.

There has been no immediate claim of responsibility for the attack, which comes a day after Syrian troops claimed to have foiled a would-be car bombing in the city. It was, however, the first of its kind in Deir Ezzor since the uprising against President Bashar al-Assad began in March 2011.

In recent months there have been a wave of bombings targeting security agencies in several Syrian cities. The most deadly attack to date took place in Damascus on May 10, when twin bombings killed 55 people and wounded nearly 400.

The government has repeatedly blamed such attacks on terrorists, and the Damascus explosions reportedly shared similarities with tactics used by al Qaeda.

On Thursday, UN Secretary-General Ban Ki-moon said he believed that "alarmingly and surprisingly" al Qaeda must have been behind the attack on the Syrian capital.

The United States and Russia have also previously alluded to the presence of the terrorist organization in Syria.