Despite recent growth in internet connectivity, Africa lags behind other regions of the world. The World Bank hopes to help the continent achieve universal connectivity by 2030, but huge hurdles stand in the way. 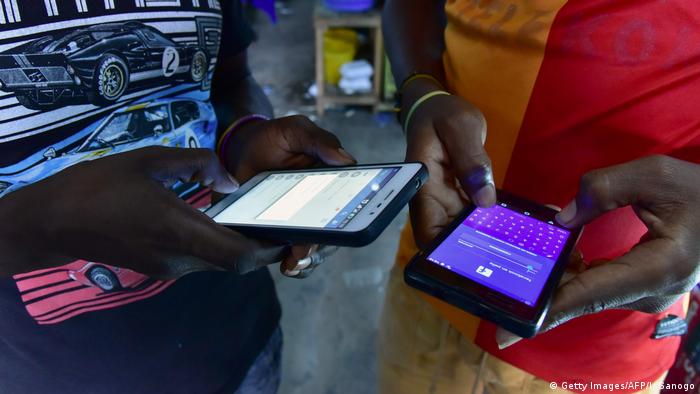 IT experts say Africa has the largest potential for digital growth

In this rural area which only recently gained access to cellular networks, people's lives are being rapidly transformed by internet connectivity.

Previously, people had to make do with weak network signals and, in some cases, needed to walk several kilometers just to make a phone call.

But a few weeks ago, authorities and telecom companies set up infrastructure to connect the region via a 4G broadband network.

"It's making things now easy, whoever comes, maximum, one minute, you are done with that person, and the person can go," Dagblo told DW. "Unlike those days [where] you can be [with] one person close to 10 minutes and getting to the end, the network will fail you, and you have to start all over again."

Nearby, a group of young people sat under a cashew tree using their phones. One of them, Musah Nangode, said he felt very excited about this new connectivity.

"We did not have this privilege others were enjoying in other districts," Nangode said, adding that they could not make calls, transact mobile money, or use WhatsApp and Twitter.

"We were just left out, which was a hell here," he added.

Ghana was among the first African countries to liberalize the telecommunications market in 1990. Two years later, the internet became accessible.

Today, nearly 70% of Ghana's 30 million people are mobile subscribers, according to the National Communications Authority (NCA).

"That is where they will be able to learn beyond imagination," Gaida said.

African languages at a digital disadvantage 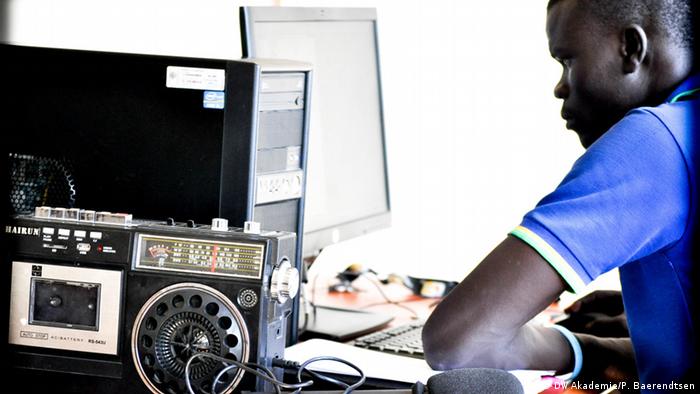 Connecting to the internet in South Sudan can be frustrating

The number of mobile phone connections in South Sudan is equivalent to roughly 20% of the population, according to 2020 figures from DataReportal.

"It is very difficult in South Sudan to get in touch with our family members because we have the internet in South Sudan but it is not all that fast," Dedi Ezbon Samuel, a radio journalist in the capital, Juba, told DW. "Even in some parts of the country, we find there is no internet."

His frustrations are shared by Jimmy Alithum. The 45-year-old hardware businessman complained that the phone companies give way too little time on their data bundles.

"Sometimes when I am at home doing my research using my phone or my laptop, it is a little bit disturbing because you feel like the time given [by phone companies to browse] is not enough and you have spent a lot of money," he said.

"Most people are doing business online and maybe there is a picture of a certain item that is on display, you want to view and so you click on it, It takes so long and if you are in a hurry you cannot wait," Alithum said, adding that in the process he was using up data bundles.

Gama also highlighted the need to improve the country's infrastructure, such as roads and railway, as a means of accelerating internet penetration.

"Besides that, the issue of insecurity tends to make a lot of losses for internet and telecom companies in this country," he said.

South Sudan has been ravaged by internal power and ethnic strife since it gained independence from Sudan in 2011.

Over the past decade, African leaders working with various local and international partners have made great strides in making the internet accessible for the continent's 1.4 billion people.

But — with just 22% internet connectivity — the continent remains significantly behind other world regions.

IT experts have long argued that the cost of data is too high for most people. In addition, lack of digital skills and literacy remains a stumbling block for many, particularly those living in rural areas.

Africa will require an investment totaling $100 billion (€86 billion) to plug every citizen into the internet by 2030, according to a World Bank estimate.

"Let us be clear: No single actor will be able to meet Africa's 2030 target and carry the burden of a $100 billion investment funding requirement alone," Hafez Ghanem, the World Bank's vice president for Eastern and Southern Africa, said on the bank's website. He added that all stakeholders must strive to ensure that every African has affordable and reliable access to the internet.

In October, US tech giant Google announced that it intends to invest $1 billion in Africa over the next five years. The massive funds will ensure access to fast and affordable internet and support startups to aid the continent's digital transformation. Nigeria, Kenya, Ghana and Uganda will be the prime beneficiaries.

Abdul Rahaman Nayuni, from the Yunyoo community of northern Ghana, can attest to that.

"If you don't monitor the internet, you wouldn't know there is an opportunity somewhere. Now I can sit in my room every morning, go to the job opportunity platforms and see if anything is going on in Ghana," he said.

Maxwell Suuk and Waakhe Wudu Simon contributed to this article