It may be worth letting a dog sniff your socks. According to a British study, the method could be used to detect malaria earlier. 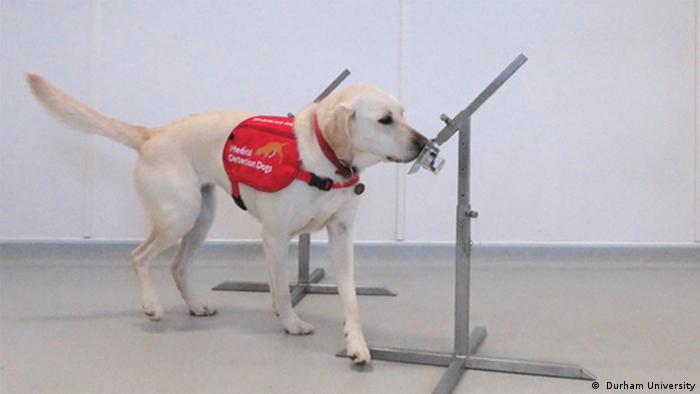 Sniffer dog Lexi is a golden retriever. For her, sniffing out socks is a game.

Sally and Lexi smell a lot of socks. The two malaria sniffing dogs have learned to smell the parasite well. They've had lots of practice to get to this point.

The first sock that Sally passed simply smelled like a sock. The second and third were the same. But the fourth sock smelled different. The Labrador stopped for a moment, sniffed again and signaled that she knew: this sock smelled of malaria. And she was right. She had done her job as a medical sniffing dog, and there was a reward for that.

The smelling ability of dogs is 60 times greater than that of humans. This is due to their nearly 300 million olfactory cells. Trained dogs can warn diabetics of the threat of hypoglycaemia and epileptics of a seizure. They can tell whether someone has cancer by the air they exhale. Sally and Lexi can tell by a person's body odor whether or not they are carrying malaria parasites. The disease is still a big problem, especially in Africa and parts of Asia. 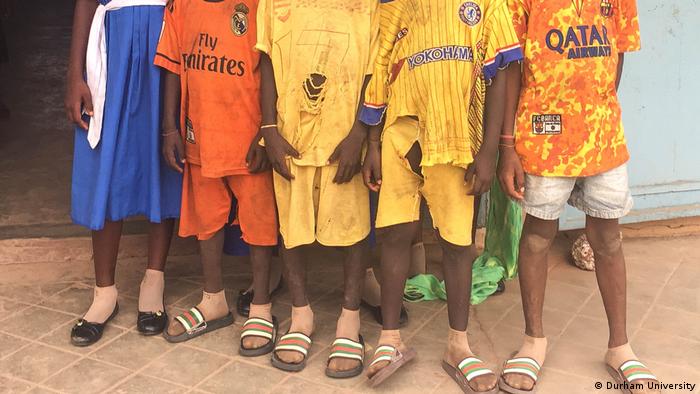 These children in Gambia were provided with special nylon stockings

Employing the sock test in Gambia

Around 600 Gambian children aged five to ten took part in a study conducted by the University of Durham, England.

"We went to the Gambia and we went to four schools at the end of the rainy season when Malaria is most common, and we collected samples of blood from 600 school children. And importantly for us, we gave each child a pair of socks to wear overnight or stockings. They are a bit like nylons, short nylon stockings", saidProfessor Steven Lindsay who led the study.

The very personal smell of each child was then transferred to the stockings.

The researchers then vacuum-packed the worn stockings and sent them back to England. There they were held under the nose of the olfactory experts. The two dogs who were involved in the experiment correctly identified 70 percent of the infected children using the socks they wore.

"This is the first test for malaria parasites and the first parasitological disease," explained Lindsay. "I'm sure there is room to do it with other diseases as well."

In order to differentiate between malaria-positive and malaria-negative socks, the children's blood samples were examined and assigned to the corresponding socks. Based on the blood samples, the scientists found that 30 of the 175 children tested were infected with Plasmodium falciparum, a malaria pathogen.

Sally and Lexi recognized the parasite infections at a very early stage without any blood tests and with only their fine noses. None of the children had actually developed the disease yet. But the parasites were already in their bodies and this was reflected in their socks. The earlier malaria is detected, the better the prognosis for treatment, and the sooner doctors can administer drugs.

For the dogs it's a game

"We had five stands. On each stand there was a little glass jar, which held a strip of sock. We took each sock and cut it into four bits," Lindsay explained.

The dogs walked along the line of containers and if one of the containers contained the sock of an infected child, the dog would report it.

Taking blood samples from the whole population at random to track down possible malaria infections is practically impossible. The situation is different when working with these canine olfactory specialists.

"The main difference is the blood tests are invasive so you have to take a finger prick. The dogs don't have to touch you, they can smell you," said Lindsay. The diagnosis takes place at a distance, so to speak, and there is no need for equipment.

Lindsay is convinced that the use of dogs could become a quick and uncomplicated method to identify malaria in people who do not show symptoms but are still highly contagious.

Similar to drug detection dogs, the four-legged malaria experts could be used at airports, for example.

"Take, for example, South Africa where they've got really good malaria control in the country but they get thousands of cases each year and that is due to migrant workers coming across from Mozambique or surrounding countries, bringing the parasites with them. And these people are not sick, so 'Why should I take a test or take medicine when I'm not ill?' And then they can get bitten by a South African mosquito and they can transmit the disease again."

The four-legged sniffers could help reduce this danger.