Cambodia's Hun Sen has a blunt message for Ban Ki-moon

UN Secretary-General Ban Ki-moon arrived in Cambodia late on Tuesday. He met Prime Minister Hun Sen on Wednesday who gave him a couple of blunt messages. 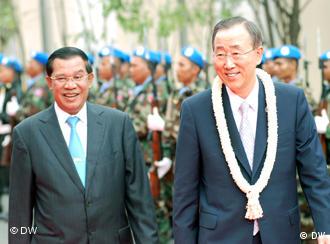 It was hardly the dream start UN Secretary-General Ban Ki-moon would have wanted for his first trip to Cambodia.

Hun Sen then informed Ban Ki-moon that he was utterly opposed to the Khmer Rouge tribunal charging any further suspects.

The tribunal, which is a joint UN-Cambodian creation and is funded mainly with contributions from UN member states, was designed to find some form of justice for the surviving victims of the Khmer Rouge that is blamed for the deaths of up to 2.2 million people during its rule between 1975 and 1979.

From crisis to crisis

But the court has wobbled from crisis to crisis over the past couple of years. First corruption raised its head, then there were allegations of political interference – which Hun Sen’s comments on Tuesday will reignite. 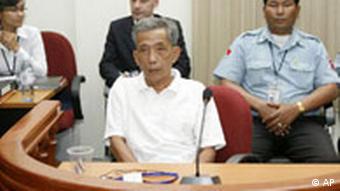 The court has also intermittently run out of money from cash-strapped donor nations, which are themselves struggling in straitened economic times. However, through it all the court has carried on with its work.

Earlier this year, the judges confirmed they were investigating five more suspects – whom they did not name – in connection with allegations of involvement in war crimes and crimes against humanity, all of which is perfectly in tune with the tribunal’s remit. Those new cases are known as cases 3 and 4.

Hun Sen came out against them, saying that the trial of Comrade Duch, the former security chief who was sentenced to 30 years in July, and next year’s trial of four senior leaders of the movement, would be quite enough.

Minister of Information Khieu Kanharith said Hun Sen was opposed to further cases on a number of grounds – first, because he considers more prosecutions would be outside the remit of the court, and also because the five being investigated in cases 3 and 4 are not high-ranking members of the Khmer Rouge.

"The second reason is that the primary goal of setting up this court is first to find justice for Cambodian people, and two is to preserve the peace and political stability in the country."

This could be interpreted as political interference in what is a judicial process.

"During the meeting with the prime minister and outside that meeting the secretary-general has made clear that this is a judicial process, those are judicial decisions, and the independence of the court needs to be respected," Ban Ki-moon's spokesman Yves Sorokobi said.

"Those are decisions for the court officials to make, and the secretary-general is not in a position whatsoever to make those decisions. That is not for him to make." 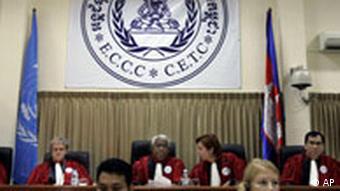 Sorokobi also said that court officials and independent councilors would also decide on whether cases 3 and 4 go ahead. "We have to give them the space that they need to make the proper decision. There should be no political interference with their work."

Ban Ki-moon in a tricky position

When it comes to Hun Sen telling the UN that he considers the UN's human rights office here no longer necessary, Sorokobi said Ban Ki-moon would take that on board, since the presence of any human rights office in a member state is a matter of bilateral agreement but he stressed that no formal request to close the office had yet been made.

However, regarding selection of staff, Hun Sen’s demand that the country head of the UN human rights office in Cambodia, Christophe Peschoux, be sacked, is a different matter.

´"We just want to make clear for the record that the secretary-general stands by the work of his High Commissioner for Human Rights, and that pulling staff out of a particular country or not is a matter of internal personal issues. So it's a matter for the secretary-general to decide. In the meantime, like I said, we fully stand by the work of the human rights commissioner and by her representatives around the world including here," Sorokobi said.

Wednesday is the second – and final – day of Ban Ki-moon's visit to Cambodia before he heads to Vietnam and China. After the surprises in Cambodia, he will doubtless be wondering what the rest of his trip has in store.

Days after four Khmer Rouge leaders were indicted on charges of genocide and war crimes, some of the tribunal's senior staff went to the former Khmer Rouge stronghold of Pailin to explain the court's purpose. (27.09.2010)

The international war crimes tribunal in Phnom Penh is charging the four surviving leaders of the Khmer Rouge: genocide, war crimes and crimes against humanity. Though late, it is a retribution for the victims who died. (16.09.2010)

Several projects have been launched in Cambodia to educate people about the Khmer Rouge regime and to ensure that the war crimes tribunal has a lasting impact. (19.08.2010)