The EU Commission has proposed bans on fisheries imports from Cambodia, Belize and Guinea, accusing them of failing to curb illegal fishing. Three other nations have been reprimanded and might face sanctions next year. 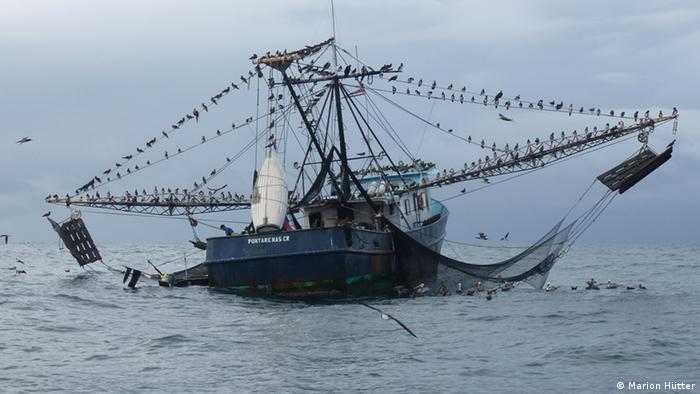 The EU Commission called on the bloc's 28 governments to ban fisheries imports from Belize, Cambodia and Guinea for failing to address the problem of illegal fishing in their territorial waters, the European Union's executive body announced Tuesday.

The three countries had not made credible progress after they had been shown "yellow cards" last year, the Commission said.

It added that Fiji, Panama, Sri Lanka, Togo and Vanuatu, by contrast, had made sufficient progress to avoid trade sanctions.

The three countries facing bans had been warned a year ago, Damanakii said. Appeals had delivered no results, she said, "because they don't have effective control of their fleets."

She also stressed that the EU executive Commission would continue to put pressure on countries accused of fuelling the supply chain through illegal fishing.

The EU has estimated that up to 26 million tons of fish were caught illegally worldwide each year, massively depleting global stocks. International rules to avoid this were agreed in 2001.

The sanctions, which still need to be approved by the 28 EU governments, ban all fish deliveries from alleged offenders to the world's largest market for fresh and frozen fish and seafood.

According to EU statistics, the bloc imported more than 50 million tons of fisheries products in 2011, worth about 18.5 billion euros ($25 billion).

In the past, West Africa had been a main source of illegal fishing, Damanaki said. But the focus was now shifting to the Pacific region, she added.

Once approved, the restrictions would also prohibit EU vessels from fishing in the affected countries' waters.

Apart from imposing bans on the three countries, the EU Fisheries Commissioner also put South Korea, Ghana and the Caribbean Island of Curacao on a blacklist of nations allegedly not complying with international rules against overfishing. They could face sanctions next year.

Greenpeace said the EU decision would "motivate all six countries to improve fisheries management and help create a better future for their seas and fishermen."