Groups of adults pulling Schnaps carts through the icy flats of northern Germany while playing silly games can only mean one thing: it’s cabbage tour season! Join DW's Carla Bleiker to learn about the tradition. 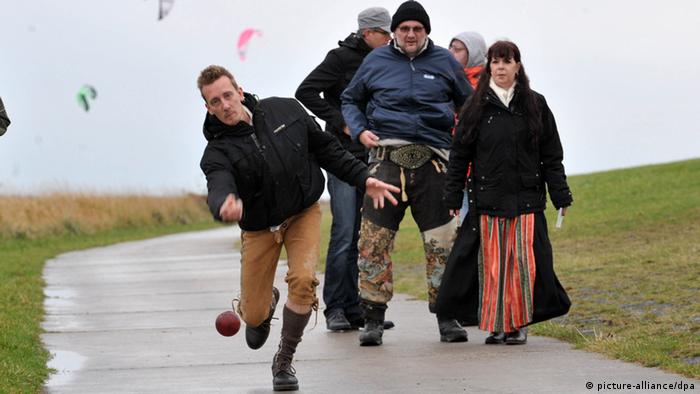 The time between Christmas and Easter is cold and grey, but in the area between the German towns of Oldenburg and Bremen, the "Kohlfahrt" tradition brightens the winter months. Green cabbage, the meal that marks the finish of each cabbage tour, can be found on restaurant menus starting in October –even though an old rule says not to eat it before the first frost –but the high time for tours is from January to March.

Even though cabbage tours are a traditional German phenomenon, their essential ingredient is not. Curly kale, green cabbage in verbatim translation and Brassica oleracea acephala in Latin, is thought to have its roots in the Mediterranean. Whether it originated in ancient Greece or somewhere on the coasts of North Africa, no one knows. Today, the leafy green is part of many meals worldwide. 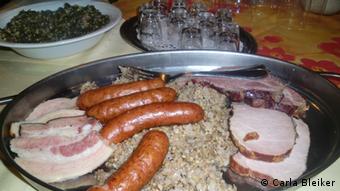 "My favorite international recipe is Italian kale pesto, because it's so fresh and green the vitamins basically bite you in the nose," Lühr tells DW. Still, he's fond of the traditional Northern German version, too.

Lühr prepares at least one large kale meal for family and friends a year. He spends two days in the kitchen patiently stirring the kale and sausage, cooking potatoes and turning the large pieces of bacon and ham that come with every German kale meal, also known as "Kohl und Pinkel."

To truly enjoy so much food, you have to work up an appetite. A typical cabbage tour starts with a two-hour walk through winter landscapes in the afternoon, followed by "Kohl und Pinkel" in a large restaurant. After that, there's dancing to music provided by a live band or a DJ.

Linda, a 30-year-old from Bremen, is a regular Kohlfahr participant. She and eight other members from her dance team hang shot glasses from strings around their necks, while pulling a little cart decorated with balloons and paper streamers. Inside: 5 different bottles of liquor, teabags, large dice and two jump ropes. These are must-have cabbage tour accessories. 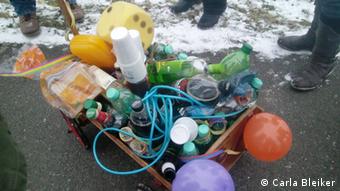 A decorated wagon contains all the equipment for the tour games

Linda and her friends need two hours for the four-kilometer route, because they stop every 5 minutes. The rules vary from group to group, but usually, a cabbage tour walk goes something like this: You have to raise the little glass around your neck whenever the group walks past an intersection, or someone throws a six with the foam dice. Some groups use egg cups instead of glasses, and the most efficient ones have "Schlucklatten", long boards with shot glasses mounted on them, so five or more people have to drink at once. When they're not walking or drinking, people on a cabbage tour stop for games you'd normally see at a child's birthday party.

The dance team starts out with a classic: teabag tossing. The tosser puts the teabag in her mouth to wet it, then hangs on to the little string with her teeth and flings it as far as possible. Later, Linda's partner André has to manage 10 skips with the jump rope because he rolled a 5 with the dice. Other popular games include transporting an egg from A to B on a spoon you hold with your mouth, and the classic three-legged race.

When the groups finally reach their destination, they're happy, hungry and ready to party.

Almost every restaurant in north-western Germany offers all-inclusive cabbage parties with food, drink and music. But the Landidyll Hotel Backenköhler in Stenum, Lower Saxony, is the king of cabbage. The hotel's restaurant can accommodate up to 1,100 people, or around 75 cabbage tour groups, in one night.

"We look for all-male and all-female groups and try to place them together at one table," manager Uwe Vosteen says to DW. "It doesn't take much more to get the party going."

Bremen citizens are fond and proud of "their" local beer. But 10 years ago, the traditional brewery was purchased by Belgian beer giant Interbrew. Still, Beck’s remains popular in its hometown - and all over the world. (21.12.2012)

Germans are punctual and reliable, badly dressed and have no sense of humor. True or false? Read on to find out whether the clichés fit the German identity.

Check out some of the more popular travel destinations in Germany.

Read about some of the more common German traditions