Washington rolled out the red carpet for French President Nicolas Sarkozy on Tuesday. He and Bush emphasized their countries' historical friendship and common interests, despite icy relations over the past few years. Sarkozy's dinner at the White House was a black-tie affair

After a warm welcome from US President George W. Bush, Sarkozy said Tuesday he'd come to Washington with a very simple message.

"I wish to re-conquer the heart of America in a lasting fashion," he said in a toast before sitting down to a black-tie dinner in the White House.

The French president, nicknamed "Sarko the American" at home for his pro-US position, said that France and the US shared a "common destiny" as democratic nations that "believe in freedom and are prepared to struggle for freedom together."

In a rare address by a foreign leader, Sarkozy is scheduled to speak to both houses of Congress on Wednesday before joining Bush at Mount Vernon, George Washington's former residence. Iran's nuclear program and the conflicts in Afghanistan and Iraq are likely to top the leaders' agenda. 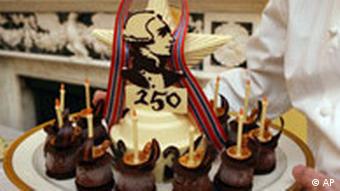 Even the menu had a historical note at Tuesdsay's dinner

Differences of opinion over the US invasion of Iraq had put a damper on relations between the two countries over the past several years, particularly under former French President Jacques Chirac. In an official visit to Washington in 2001, Sarkozy's predecessor had irked the US by hailing France as an antidote to the American "hyper-power."

Distinctly setting himself apart from Chirac, Sarkozy quipped on Tuesday that one can "be a friend of America and win an election in France."

Common interests in the Middle East

During the meeting, Bush evoked the countries' strong historical ties by bringing up Marquis de Lafayette, a French nobleman who'd played a key role in the American Revolution. 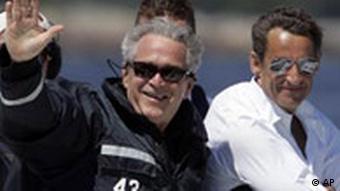 "Two centuries later, our two nations are honoring the legacy of Lafayette by helping others resist tyranny and terror," said Bush, referring to a common interest in seeing success in Afghanistan and reconciliation in Iraq, as well as putting an end to human rights abuses in Darfur and Myanmar.

"Through this cooperation, we can make the world a better place," Bush added.

Sarkozy may not see eye-to-eye with Bush on policy in Iraq, but "that doesn't influence our friendship," said the French president, who also hailed US courage after the attacks on Sept. 11, 2001.

The two are in agreement, however, on the Iran nuclear standoff and Paris has repeatedly supported stronger sanctions.

"The hypothesis of a nuclear weapon in the hands of the current leaders of Iran is for France inacceptable," said Sarkozy, adding that civilian nuclear energy is a right, also for Iran. 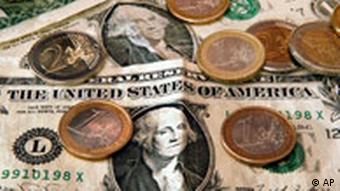 Sarkozy urged the US to strengthen its currency

Prior to the dinner at the White House, Sarkozy awarded medals to seven US World War Two veterans who had taken part in the Normandy invasion in 1944.

He also met with US and French business leaders, where he reiterated his demand for a stronger dollar. The US currency sunk to $1.4571 against the euro Tuesday, a new low.

The trip marks Sarkozy's first official visit to Washington, though he and Bush met informally during the French president's vacation to Maine in August.

German Chancellor Angela Merkel will meet Bush at his private ranch in Texas over the weekend.

Sarkozy Aims to Repair Ties, Advance Interests During US Visit

A week of international diplomacy continues when French President Sarkozy makes his first official trip to the United States. His talks with US President Bush could alter the current state of trans-Atlantic relations. (06.11.2007)

The French parliament passed a new immigration bill tightening the conditions under which immigrants' families may join them in France, including deeply controversial voluntary DNA tests to verify family ties. (24.10.2007)

What are your thoughts on the upswing in Franco-US relations? Please include your name and country in your reply.