Former US president George W. Bush says in his new memoirs that he lost trust in his then-German counterpart Gerhard Schroeder following what he said was the chancellor's reversal on the war in Iraq. 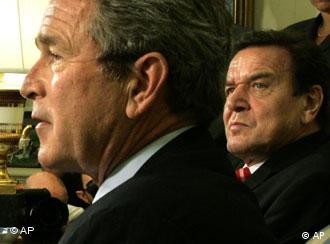 Bush says Schroeder, right, reneged on his support for Iraq

In his new memoirs, former US president George W. Bush says he lost trust in his German counterpart at the time, Gerhard Schroeder, when the chancellor turned against him over the war in Iraq.

Bush recalls in his book "Decision Points," released Tuesday in the US, that Schroeder's reversal on supporting the Iraq War in a bid to win re-election in 2004 caused their relationship to sour.

Bush says Schroeder had privately assured him he backed his policy on Iraq.

Schroeder, along with the then French and Russian presidents Jacques Chirac and Vladimir Putin, led international opposition to US diplomatic efforts to win support for invading Iraq. The war in Iraq was and remains deeply unpopular in Germany.

"As someone who valued personal diplomacy, I put a high premium on trust," Bush wrote. "Once that trust was violated, it was hard to have a constructive relationship again."

Schroeder disputed Bush's version, saying in a statement that he had only promised support if it was shown that Saddam Hussein's regime played a role in the September 11, 2001 terrorist attacks, which was not the case.

"The Bush administration's reasons for the Iraq war were based, as we know today, on lies," Schroeder said.

Bush also seized upon comments made in 2002 by a German official who compared the US president to Adolf Hitler.

"I was shocked and furious," Bush writes of the alleged remarks by the then-German justice minister, Herta Daeubler-Gmelin. "It was hard to think of anything more insulting than being compared to Hitler by a German official." The minister had to resign.

In an interview with DW, Philip Zelikow, involved with reunification for the White House, talks about Germany's reduced role since reunification and the peculiar painting he received from an East German diplomat. (30.09.2010)

A new survey reveals that Germany is more popular in the United States than it has been in a long time. The German ambassador is delighted that Americans apparently associate Germany with technology, art and culture. (02.03.2010)