Bus-Stops at Old People′s Homes Take Patients for a Ride | Germany | News and in-depth reporting from Berlin and beyond | DW | 06.06.2008

Bus-Stops at Old People's Homes Take Patients for a Ride

Old people's homes across Germany are erecting fake bus-stops to make it easier to round up senile pensioners trying to make a run for it, and also to help soothe patients who feel they have things to do, places to be. 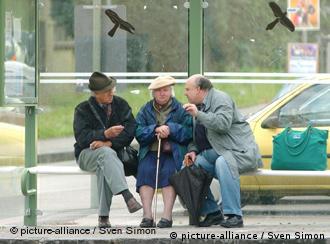 "People suffering from dementia can be very restless," Simone Zmura, director of a Hamburg retirement home, told a local newspaper. "They need to move, and they often want to leave and get out."

A year ago, the home decided that if you can't beat 'em, you have to join 'em -- and like many twilight homes in Germany, installed a bus-stop in the garden for antsy Alzheimer's patients.

Many of them will sit there for hours, waiting for a bus that never comes, but convinced they left the oven on in the apartment they haven’t lived in for sixty years.

"You can't rely on rational arguments with dementia sufferers," Richard Neureither from a home in Duesseldorf told TV station NTV. "You have to enter into their reality."

Staff can now point a patient who insists she has to get home to cook dinner for her long-dead husband in the direction of the bus-stop, and simply wait for her to return when she decides she must have missed her connection, or pick her up later. Often, she'll have forgotten after five minutes why she's there.

But when she comes back, she's likely to feel a whole lot better.

Most carers agree that allowing the patients to go along with their urge to head for the great blue yonder is the most humane option.

"The sense that they have the freedom to do what they feel they need to do is very soothing to patients," explained Sabine Gruenwald from the Muehlenau Residence in Hamburg, which introduced the scheme last summer.

And far from feeling that the patients are being led up the garden path, patients' families approve wholeheartedly.

"Relatives are invariably glad that the patients are allowed to roam about and can go and sit down outside," she said. "We're thinking about getting a roof for the bus-stop so they can even go out in the rain." 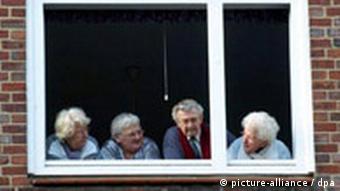 Another old people's home in Remsheid had the same idea, and goes one step further by fitting out the bus-stop with adverts and timetables dating back thirty years to give the oldies a sense of familiarity -- and a reminder of days gone by when they were younger and fitter.

While dementia tends to destroy short-term memory, long-term memory can often remain more reliable and ties to the past can help patients feel more relaxed.

Sabine Gruenwald agrees. "We’re planning on redesigning the bus-stop in a 1960s look," she said.

Researchers in Dresden have made a breakthrough in the search for a effective tool against Alzheimer's disease, although it may not be ready for human use for another decade. (24.04.2008)

Many families don't have the financial means to put invalid relatives into nursing homes. In Germany, illegal geriatric nurses from eastern Europe are often the only affordable solution for at-home care. (25.11.2006)