So far there has been no stopping Pierra Nkurunziza. He has now begun his third term as president of Burundi, despite protests from international donors. Criticism from domestic opposition figures is also growing louder. 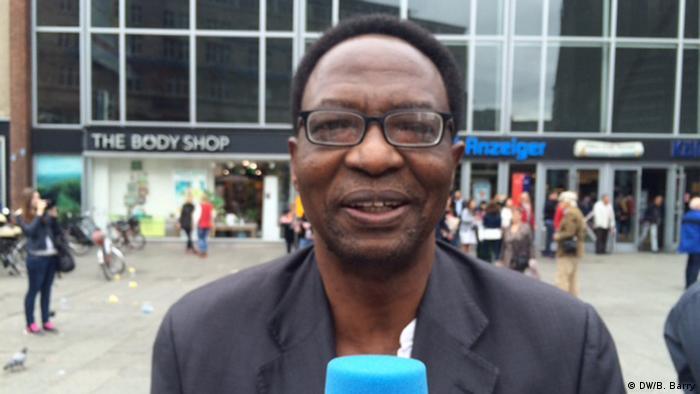 Leonard Nyangoma (seen above on a visit to Germany) is the chairman of Burundi's opposition alliance CNARED which includes members of civil society and political parties. It also represents Burundians living in the diaspora. According to UN estimates, more than 180,000 Burundians have fled the country as a result of the unrest sparked by Pierre Nkurunziza's controversial decision to run for office a third time. DW spoke to Nyangoma shortly after Nkurunziza's surprise inauguration on Thursday.

Deutsche Welle: Pierre Nkurunziza was unexpectedly inaugurated on Thursday and has embarked on a controversial third term in office. What were your thoughts when you heard of the "lightning inauguration?"

Leonard Nyangoma: I think Nkurunziza is scared. If he was consistent, he would have sworn the oath on 26 August. The constitution says the mandate of a Burundian president lasts five years and that a president may be re-elected only once. Nkurunziza had already had two mandates. Seen purely mathematically, his second term in office ends on 26 August. This act is a return to his old ways. He is used to violating the constitution. This is preposterous. 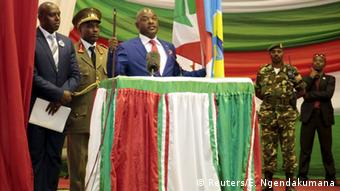 You are the chairman of the "Council for the observance of the constitution, human rights and the Arusha peace accord" (CNARED), an alliance-in -exile of several opposition movements. How does CNARED see developments?

Nkurunziza cannot act against the will of the people. The population organized around CNARED is ready to topple the dictatorship, should Nkurunziza continue to act illegally. We will do everything to remove him. What should one do with a dictatorship other than fight against it?

Would your alliance also use violence?

We favor dialogue. We will wait until 26 August. If by then Nkurunziza agrees to negotiate his resignation, then we are ready for talks. For us, he remains president until 26 August. If he resigns before the end of his mandate, that would mean he has finally got the message. But if he continues to cling on to power, we would have the legitimization to fight him with all means. I call on all forces in Burundi, including the institutions of national security, to stand as one man to expel Nkurunziza.

If that were to happen, do you not fear the reaction of the international community which rejects the use of violence to take over power?

I did not speak of violence. If the president were prepared to speak with us, then we would listen but he has left the negotiating table. We would like to proceed peacefully but Nkurunziza illegally seizes power and violates the independence and sovereignty of the country. What should we do? It is not only civilians who are affected, the military will also try to expel the dictatorship that has ruled for ten years.

You are calling for a resumption of dialogue but for the president it is clear that there will only be talks if you and your opposition alliance accept his third term. Do you really believe that his resignation is likely?

According to our information, Pierre Nkurunziza will now hold talks to form a government of national unity. Will CNARED take part in such talks and lay the ground for its participation in the future government?

Nkurunziza does not have the right to form a government. We are open for dialogue and for negotiations that lead to a transition government with a clear program, namely that free, democratic and transparent elections are held.

What would happen if the international community were to try and force you to take part in negotiations with Nkurunziza's third cabinet?

The international community – and by that I mean the donors – are against this mandate, against the violation of the constitution, against the violation of the Arusha Peace Accord. That agreement was reached under very difficult conditions after two years of tireless negotiations, under the mediation of President Mandela. Is this the moment in which the region's authorities, who took part in those negotiations, close their eyes and abandon the Arusha Accord? That would have huge consequences, not only in Burundi but also in the entire region. I do not think they would act against the Burundian people and their will. The Burundian people have the final word.

Leonard Nyangoma is the chairman of the Burundian opposition alliance CNARED

With little notice, Burundian President Pierre Nkurunziza was sworn in for a third term in power Thursday following weeks of protests and a failed coup. (20.08.2015)

Burundi's former army chief of staff, Colonel Jean Bikomagu, has been shot dead by unknown gunmen. It is the second prominent killing this month and raises fears of a violent escalation following disputed elections. (15.08.2015)