Burundi general gunned down in Bujumbura

A group of heavily armed attackers ambushed and killed Burundi general Athanase Kararuza while he was dropping his daughter at school, military officials said. The murder follows a year of violence in the country. 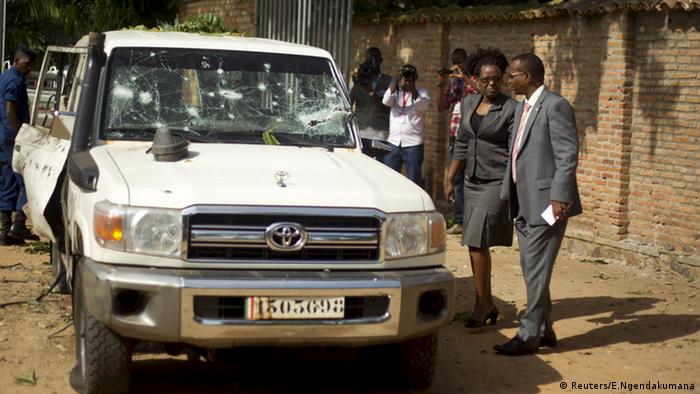 A bodyguard also died in the attack, while Kararuza's daughter, their driver and another bodyguard were injured, according to a spokesman. The army did not immediately announce details of the attackers.

The general was among few high-ranking Tutsi military officers still close to President Pierre Nkurunziza, an ethnic Hutu with a Tutsi mother.

"All such acts of violence serve no purpose other than to worsen the already volatile situation in Burundi," Dujarric said. "The secretary general urges that a rigorous and prompt investigation of these events is undertaken."

The general was recently named advisor to Vice President Gaston Sindimwo, also a Tutsi. Previously, the officer served as deputy commander of a peacekeeping force in the Central African Republic.

Kararuza's death follows a year-long spiral of violence and political crisis in Burundi. Last April, Nkurunziza sparked nation-wide turmoil by announcing he would seek a third term as head of state. The instability continues to this day, despite Nkurunziza's disputed victory at the polls.

International observers fear that the conflict might escalate into an ethnic war between Tutsi and Hutu tribes. The latest bloodshed comes as international prosecutors are launching a probe into Burundi's year of violence.

In separate attacks on Sunday, a Tutsi police colonel was seriously injured and Human Rights Minister Martin Nivyabandi and his wife managed to avoid a grenade blast while leaving church. A police officer's wife was also killed late on Sunday.

"Those who killed my colleague General Kararuza and [perpetrated] other similar attacks are trying to sow divisions in the army and the police," presidential spokesman Willy Nyamitwe wrote on Twitter.