Authorities in Burkina Faso have issued a decree alocating ministerial posts in an interim government. The military claimed six posts, including the key ministries of the interior and defense. 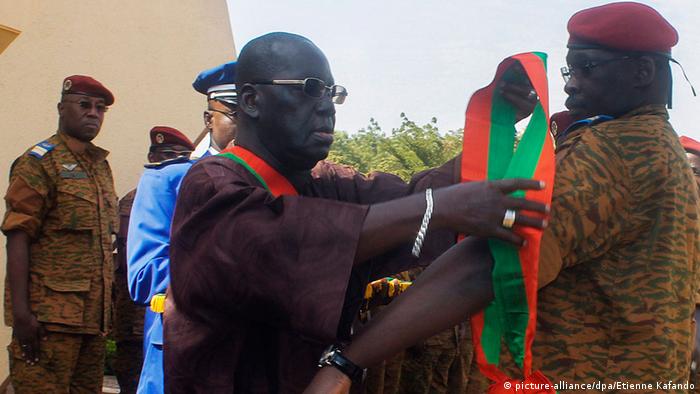 The army's Issac Zida will retain his role of prime minster, also taking on the post of defense minister, officials said.

Zida had led the country after a popular revolt that toppled veteran president Blaise Compaore, but vowed that he would stand aside and restore the country to civilian rule.

Government secretary general Alain Sery Ouattara, announcing the make-up of the new Cabinet on Sunday, said the military would also control the interior ministry. Zida's role as premier - as well as the military's control of both the police and military - means that senior military officers remain a powerful political force.

Zida, formerly deputy commander of the presidential guard, was installed as leader immediately after the uprising against Compaore - a close friend of slain Libyan leader Moammar Gadhafi and jailed Liberian warlord-turned-president Charles Taylor.

Under the present rules, neither Zida nor Kafando will be able to stand in elections in November 2015.

Western diplomats had expressed reservations about there being a strong army presence in the transitional government and sanctions may even have been possible - had the military retained the post of head of state. That role now falls to Kafando, a civilian, who also takes the portfolio of foreign minister.

Kafando has vowed to punish those who are deemed to have been responsible for excesses during Compaore's presidency.

"We will settle accounts with all those who have abused justice and who think they can siphon off public funds," Kafando said. "The message of the people is clear and we have heard it," he said. "No more injustice, no more chaos, no more corruption."

Compaore fled the country amid an uprising that was sparked by a planned constitutional change, which could have allowed him to extend his hold on power. Every change of government in Burkina Faso since independence from France in 1960, when it was called Upper Volta, has been triggered by a coup.