Bundeswehr recruits sworn in against backdrop of protest | Germany | News and in-depth reporting from Berlin and beyond | DW | 30.07.2010

Bundeswehr recruits sworn in against backdrop of protest

Police have dispersed one of a dozen anti-military protests in as army recruits take their oath in Stuttgart for the first time in 11 years. Around 1,000 police are on the scene to ensure the safety of 650 new soldiers. 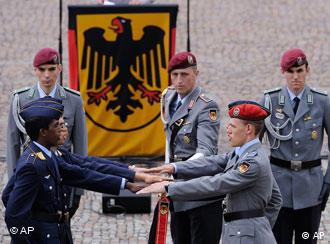 Friday's oath was the first in Stuttgart in 11 years

Police in the southwestern German city of Stuttgart on Friday dispersed a sit-down protest against the ceremonial pledge of allegiance taken by new German army, or Bundeswehr, recruits.

Just under 50 protesters sat down in front of the St. Eberhard Cathedral at midday but were not blocking the entrance to the church service for some 300 recruits and their families. Police defended their dispersal of the group, explaining that another location had been designated for the demonstration.

Authorities had initially issued permits to 13 anti-military protest groups for Friday but later revoked two of these. About 1,000 police officers were dispatched to ensure the safety of a total of 650 recruits from southern Germany. 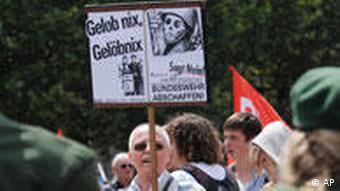 Around a dozen protest groups were granted permits

The need for security at Friday's event was already stressed last Sunday morning when 15 demonstrators occupied the cathedral in protest against the mass. Stuttgart's dean called the police to remove the protestors after telling them that the church was not the place for political action.

The recruits took their oaths at Stuttgart's New Palace in what was the first public pledge of allegiance for Bundeswehr soldiers in the city in 11 years.

Mother of killed soldier wants to take military to court

The mother of a German soldier who died in Afghanistan is seeking to sue the Defense Ministry and the Bundeswehr - arguing that better equipment and training could have prevented her son's death. (22.07.2010)

The German Bundestag is debating a proposal to decrease the length of mandatory military service in a bid to save money. But if Defense Minister Guttenberg has his way, the military draft could be scrapped altogether. (12.06.2010)