Pierre-Emerick Aubameyang's 21st goal of the season was his most dramatic, sparking a match-stopping protest from Bayer Leverkusen. In the end, Thomas Tuchel came out the victor despite a series of daring tactics. 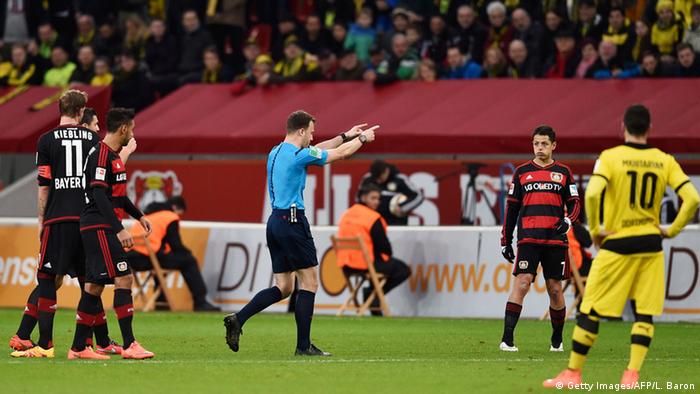 There was only one goal to talk about in Dortmund's 1-0 win over Leverkusen, but what a back story that goal had. Pierre-Emerick Aubameyang's simple strike in the second half resulted in a dramatic chain of events that forced referee Felix Zwayer to halt the game.

The goal was the result of an astute counter-attack from Dortmund. Stefan Kiessling lost out to Sven Bender outside Dortmund's penalty area. Matthias Ginter stopped the ball and passed quickly to free Marco Reus with space ahead of him, before he seemlessly threaded a ball through to Erik Durm. In acres of space, Durm crossed the ball to an onside Aubameyang, who tapped home for his 21st goal of the season.

The chain of events sparked a major protest from the Leverkusen dugout, one that resulted in Zwayer sending Roger Schmidt to the stands. Schmidt, though, refused to leave, using Stefan Kiessling as intermediary to relay a message to Zwayer. Upon delivery of Kiessling's message, Zwayer ordered the players off the pitch, and kept them in their respective locker rooms to allow the situation to cool down.

The players emerged from the locker room nine minutes later, with Schmidt not part of the Leverkusen party that return to the field. Dortmund was able to see out the result, though Chicharito nearly equalized for Leverkusen in stoppage time. 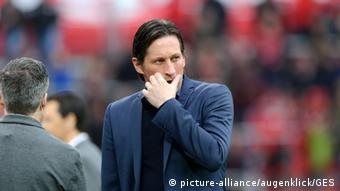 Roger Schimdt's refusal to go to the stand sparked referee Felix Zwayer to make an abnormal decision: send the players back to the clubhouse.

The match was a physical contest throughout, and Karim Bellarabi was close to getting sent off after a skirmish he had with Sokratis Papastathopoulos in the second half. The high tempers were the result of a chanceless, physical game in which both sides decided to field physical players to try and grind out a result.

Thomas Tuchel's choices were the most daring, resting several key players before Dortmund's important second-leg Europa League clash with Porto. Ginter and Bender were a physical tandem in midfield - both matching the physicality of Christoph Kramer and a deep-lying Kiessling - while Moritz Leitner and Christian Pulisic got their first Bundesliga starts of the season. Schmidt tried to counter Tuchel's physical approach by bringing on Kyriakos Papadopoulos and Andre Ramahlo at halftime.

In all, five of the six substitions from both teams were defensive ones, a byproduct of a very physical match. Tuchel's bold tactics payed off in spades, getting the win without having to play Marco Reus, Ilkay Gündogan, or Julian Weigl for a full 90 minutes. Dortmund were able to do what Bayern Munich couldn't - come out of Leverkusen with three points - and that kept them eight-points behind the Bundesliga leaders in the table.

Auabameyang: I promised my grandfather I'd play for Real Madrid

Borussia Dortmund's top goal scorer this season says he used to watch videos of Real Madrid great Hugo Sanchez and says his elaborate goal celebration is a homage to him. (20.02.2016)

Bayern Munich had to overcome an opening goal from Darmstadt to claim all three points at the Allianz Arena. Hoffenheim got its first win under Julian Nagelsmann against Mainz. (20.02.2016)