Bulgarians protest government of ′oligarchs′ | Europe | News and current affairs from around the continent | DW | 26.06.2013

Bulgarians have taken to the streets of Sofia to vent their anger over several appointments the government has made that they see as dubious and only serving the interests of oligarchs. 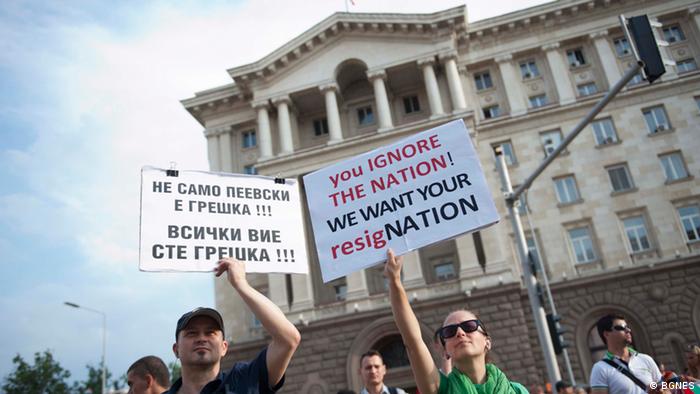 For two weeks, thousands of Bulgarians have been chanting "Step down" and "Mafia" in front of government buildings in the capital Sofia.

The governing coalition of Socialists and the Turkish minority party DPS has been in office less than a month, and people are calling for it to step down. When people took to the streets in February, which prompted the government of Boyko Borissov to step down, it was over utility prices.

This time, it is not about social problems in the EU's poorest country, it is about highlighting what the mainly middle class, university-educated protesters see as a corrupt political elite in Bulgaria.

The protests flared up when the government announced it would appoint Delyan Peevski as head of the secret service. Many Bulgarians see 32-year-old Peevski as highly dubious and well-connected in Bulgaria's underworld. 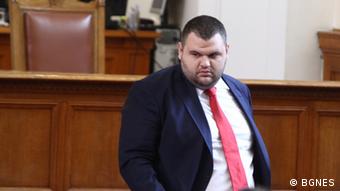 Peevski is seen as a shady figure by many Bulgarians

Peevski and his mother, Irena Krasteva, who is the former head of the national lottery, own a television channel, several newspapers and the biggest newspaper printing press. Just where the money for these investments came from, is not clear.

In 2007, Peevski's career seemed to come to a halt. When he was the head of Ministry of Emergency Situations, he was being investigated for embezzlement and corruption, but was never formally charged.

The way the current government fast-tracked his appointment as head of the secret service sparked angry protests, as the government even amended certain laws to match Peevski's profile with the job.

Daniel Smilov, program director at the Center for Liberal Strategies in Sofia, expects the political crisis to get worse, with snap elections the only way to end it. "They should take place within the next six months," he said.

Peevski's appointment was by no means the government's only questionable decision. Ivan Ivanov was deputy minister for the interior for all but three hours, before he had to resign again. It had been revealed that he was connected to a criminal group.

Other appointments by the government also led people to believe that oligarchs were being favored. Voters felt betrayed by what they see as a corrupt political elite. The conservative politician said there was now no longer a dividing line between left and right, but between citizens and the mafia.

"The politicians thought they could only hold on to power by enforcing strict discipline within their party and hide behind shady power mechanisms," Parvan Simeonov from the polling institute Gallup told DW.

"Now, they've realized that it was a big mistake and that every mistake hurts their image," he added.

Around 60 scientists, politicians, journalists and legal experts have founded a new initiative known as the "Charter 2013," which aims to fight plutocracy and put pressure on the government.

Peevski is seen as a shady figure by many Bulgarians

"The charter's content has everything you could possibly want," according to the former deputy German ambassador to Bulgaria, Klaus Schrameyer. But he thinks the document is a bit too worthy, vague and all-encompassing to be truly revolutionary.

"Rather than list every single shortcoming in Bulgarian society, they should have listed clear priorities, like calling for new legislation on elections, setting up a national assembly to revamp the constitution, strengthening the rights of the president, making the judiciary less political and curbing the powers of the general national prosecutor," the former diplomat told DW.

It is hard to say whether the current government can hang on to power. In an interview with Austrian daily Die Presse, the head of the Socialists, Sergey Stanishev, called the situation in Bulgaria "as explosive as a pressure cooker" and called for calm.

He insisted the new government was prepared to discuss Bulgaria's problems, including high energy prices, poverty and the state of the economy.

Bulgaria’s general election on Sunday failed to produce an outright winner, plunging the Balkan country into further political uncertainty and raising the prospect of fresh polls. (13.05.2013)

In Turkey, migrants from the Balkans have traditionally supported Prime Minister Erdogan. But it looks as if the forced clearance of Gezi Park may have cost the Prime Minister some of that support. (20.06.2013)

For the eighth straight day, thousands of Bulgarians have demonstrated for the government to resign. Nearly 10,000 people have joined rallies in Sofia nightly since June 14. (21.06.2013)