Ultra-conservative bishop Richard Williamson has been fined 10,000 euros for denying aspects of the Holocaust in an interview for Swedish television. He made the comments while on German soil. 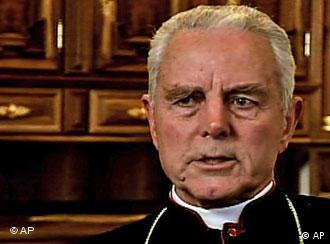 Williamson's comments have cost him 10,000 euros

A court in the Bavarian city of Regensburg has fined a conservative British bishop 10,000 euros ($13,500) for partial Holocaust denial in a television interview.

Bishop Richard Williamson did not attend the hearing, and his lawyer said he was instructed not to by his ultra-conservative order, the Saint Pius X Society.

"Bishop Williamson would gladly have come," defense lawyer Matthias Lossmann told the court in Regensburg, "but the Saint Pius X Society suggested he did not. To be precise, they forbade him from coming."

While the maximum sentence for Holocaust denial - a criminal offence in Germany - is five years in prison, the court in Regensburg had said in the run-up to the trial that a fine would be the most likely outcome in the case of a guilty verdict.

The clergyman had already incurred a 12,000-euro fine for a 2008 Swedish television interview he gave from the Saint Pius X seminary near Regensburg. Because Williamson refused to pay this, the Regensburg court elected to open criminal proceedings against him.

In the interview he argued that only "200,000 to 300,000 Jews perished in Nazi concentration camps," and further argued that gas chambers had not been used as a method of mass-execution.

Holocaust denial is a criminal offense in Germany and Austria. Williamson had asked the Swedish station to ensure that the footage was never shown in Germany, but it soon spread around the Internet on Web sites like Youtube.

On Friday the Regensburg court heard an excerpt of the television interview, in which Williamson is heard telling the interviewer: "Be careful, this is against the law in Germany."

Lossmann argued his client was told that the interview would be aired only in Sweden.

The court in Regensburg ruled that Williamson was subject to German law nonetheless, as he was in Germany when the footage was recorded.

Williamson's views have caused problems for the Catholic Church at large. The January 2008 reversal of Williamson's excommunication by Pope Benedict XVI drew criticism from many, including German Chancellor Angela Merkel, who demanded that the pope "clarify unambiguously that there can be no denying" that the Nazis killed six million Jews.,

Williamson's interview was first aired in Sweden the day after his excommunication was lifted.

During Pope Benedict XVI's visit to Rome's main synagogue on Sunday, an Italian Jewish leader criticized the pontiff's wartime predecessor for not having spoken out against the Nazis in solidarity with Jews. (17.01.2010)

A judge in the German city of Regensburg is weighing up whether to issue a warrant against controversial Catholic bishop Richard Williamson, who has denied the mass murder of European Jews by Nazi Germany. (15.10.2009)