Breaking Down the Wall in the Head

On Oct.3, Germany marks 14 years since reunification. Although the physical barrier between east and west is a thing of the past, many Germans still speak about the "Mauer im Kopf" -- the Wall in the head. 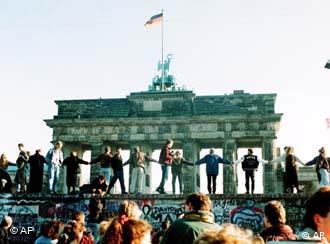 Germans celebrating the fall of the Wall. Now, many want it back

In Berlin today, there's very little left of the Berlin Wall. Even those who've lived here all their lives have difficulty remembering exactly where it used to be. But if every fifth person in Germany had their way, the barrier that split the country during the Cold War would be resurrected.

A recent poll conducted by the Forsa research institute found that a quarter of West Germans wished the Berlin Wall could be rebuilt, while 12 percent of East Germans said they didn't want to live in a united Germany.

It's not exactly a glowing testimony about the progress made in the 14 years since the Wende, the term used here to describe German reunification.

Stereotypes about East and West are stubborn. East Germans think of westerners as "Besser-Wessies," or arrogant know-it-alls. West Germans, in turn, roll their eyes about the "Jammer Ossies," or whining easterners. 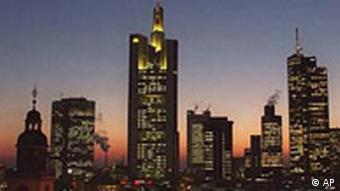 "East Germans have a false perception of affluence in the West. They overestimate the level of prosperity, and take the upper income level as the average, so many of their demands are unrealistic," says Klaus Schröder, an expert on the former East Germany at Berlin's Free University. "West Germans are envious when they see how much money is being transferred to the East. Many people feel that the true cost of reunification is being hidden from them."

Negative western stereotypes about easterners have even been passed down to the younger generation, to those who were teenagers when the Wall fell. There's been an exodus of young easterners to western cities in the 14 years following reunification, but those who've remained in the East are often pegged as lazy, unmotivated, and bitter about their future prospects.

Those assumptions are wrong, say sociologists at a leading public opinion research institute in the southern German city of Allensbach. They quizzed 2,000 Germans on their attitudes on typically Western values. While they concluded that, in the East, values such as equality and social justice ranked higher than individual freedom, the researchers admit they were surprised by the responses of young easterners. 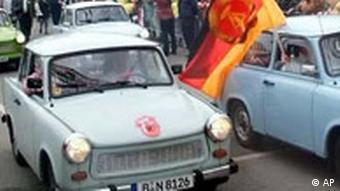 "The younger generation of easterners aren't just falling back into a basic attitude of depression, they're taking initiative," Thomas Petersen, project leader at the Allensbach institute told DW-WORLD. "Their optimism and strength is tangible, and those are the qualities that a region needs to pull itself out of the doldrums."

That description could apply to Leipzig resident Rita Barwitzki, 26, who was a pre-teen when the Wall fell. She says living through the experience has made her stronger.

"I gave up a piece of my identity, and because of that, there was this impulse to experience new things, and not to stay stuck in the past," she recalls. "And there were new things, there was a whole new system. I think I'm more free, more independent today because of those changes."

But Barwitzki couldn't be more different from fellow easterner Lutz R., a Berliner who was in his early 30s when the Wall fell. As incredible as it sounds to Western ears, Lutz says he felt more free under the East German regime than he does now.

"Freedom is relative. In my job now, if I were to complain to my boss about how things are working, I would have to worry about getting fired. For me, that means I'm not free," Lutz told DW-WORLD. "In East Germany, I could say what I thought. Not about the government, of course, but then I didn't have anything against the government. But at work, if I complained to my boss, he'd listen, and I didn't have to fear the consequences."

Lutz remembers East Germany as a great country for young people -- a place where he had a steady job, enough food, and a nice apartment located just a few meters from the Berlin Wall. It's presence never bothered him. On the contrary, it reassured him.

"The Wall was an anti-fascist protective measure, it was there to protect us from the West," he says. 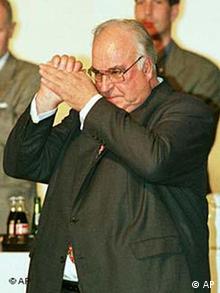 For East Germany expert Klaus Schröder, the persistence of such attitudes stems from key decisions made in 1990 when the two Germanys became one.

"From the very beginning of reunification, we only thought about the money," Schröder explains. "But that was only half the story. We should have also paid attention to the fact that this reunited nation would need to start sharing common values. Back then, everybody thought that those problems would go away if you threw money at them. That's proved not to be true."

While few expected reunification to happen overnight, those who experienced the euphoria in 1989 when the Wall fell would probably not have guessed that, in 2004, the gap between East and West would still be so wide. It seems that Germany's best hope of breaking down the "Wall in the head" lies in its young people, for whom the Cold War is an indistinct, childhood memory.

More marches against the Hartz IV welfare reforms took place on Monday. Again the focus was on the east of Germany where anger is growing and discontent over conditions in the former communist states is rife. (Aug. 31, 2004)

Eastern Attitudes Toward the State

Recent protests against welfare reforms in Germany have been largest in the east. Some analysts say that due to eastern Germans' history under socialism, they tend to look to the state to solve their problems. (Sept. 3, 2004)

When the German cabinet presented its annual report on the state of German unity Wednesday, it reached the unexpected conclusion that the economic gap between East and West has, in fact, begun to close. (Sept. 22, 2004)