The judges have voted six to three, overruling an order to suspend the president of the Senate. The order threatened to upend President Michel Temer's efforts to revive the economy by cutting government spending. 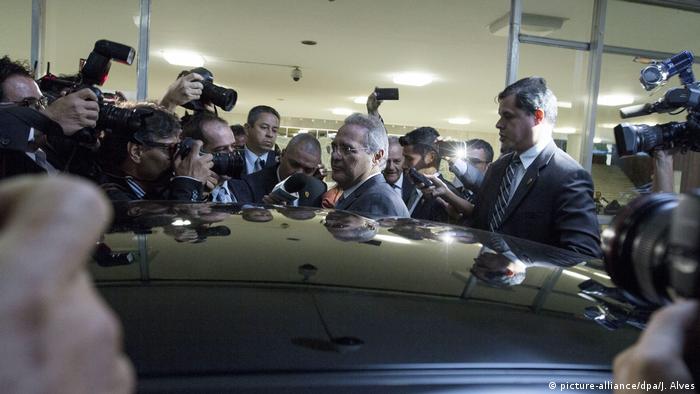 Brazil's Supreme Court on Wednesday overruled a justice's injunction ordering Senate speaker Renan Calheiros to step down after being indicted on embezzlement charges.

Mello's ruling on Monday threatened to upend President Michel Temer's efforts to cut government spending amid a series of scandals that has witnessed the removal of a president and senior lawmaker.

One of Temer's most powerful allies, Calheiros is known for his role in driving impeachment proceedings against former President Dilma Rousseff.

"Our confidence in Brazil's judiciary and the separation of powers continues unshaken," said Calheiros in a statement on Wednesday.

The ruling also removes Calheiros from the line of succession, in accordance with a Supreme Court ruling in November that barred officials indicted for a crime from standing in the presidential line of succession.

The decision to overturn Mello's ruling comes amid legislative efforts to curb prosecutors' ability to investigate politicians over corruption allegations.

Earlier this month, prosecutors indicted Calheiros in a nine-year case concerning the use of public funds to pay for child support payments to a former partner.

He also faces 10 other corruption investigations, many of them linked to the notorious bribery and kickback schemes surrounding state-run oil company Petrobras.

On Sunday, tens of thousands of protesters took to the streets across Brazil, calling for Calheiros to be removed from office.