Brazil has become the preeminent Latin American nation in recent years, leading in most areas of industry and commerce. New president Dilma Rousseff may now push for dominance in the arena of regional nuclear supremacy. 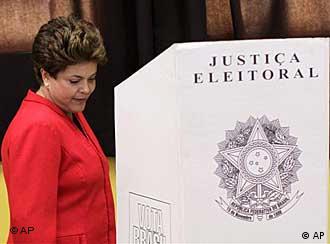 Dilma Rousseff will be expected to continue Lula's policies

Lula has been championing Rousseff at least in part to maintain continuity in the country, where he has presided over a period of financial stability, welfare reform, booming consumption, and strong exports of Brazil's abundant natural resources. 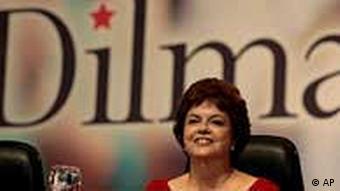 Many observers believe it is Lula's policies - which Rousseff is expected to follow - that are boosting her candidacy among the populace. It appears that the president is not the only one eager to see his legacy continue.

Expectations for a new president

However, one policy that Dilma will inherit - and be expected to expand upon - may draw unwanted international attention. Brazil has been actively seeking to expand its nuclear power structure under Lula's tenure as president and it is expected to develop further under his successor.

"Dilma will continue Lula's vision but nuclear ambitions were not a big theme in the electoral campaigns and it will not be a big theme during her administration," Thiago de Aragao, the director for Latin American political risk analysis at Arko Advice, a political think-tank in Brazil, told Deutsche Welle. "The Brazilians have a single goal: to have the best nuclear capability the country can have, but one step lower, without the atomic bomb."

Brazil has the most advanced nuclear capabilities in Latin America with two nuclear power plants - Angra I and Angra II - in operation. A third, Angra III, is under construction. It has highly skilled scientists, advanced technologies for enriching uranium, and a dependable raw material base. Only Argentina provides Brazil with any serious competition.

"Brazil has a very modern capability of enriching uranium," de Aragao said. According to government sources, Brazilian technology is unique and very advanced compared to others, he said. Alongside that, the country has one of the top five uranium reserves in the world.

"As an aspiring power, Brazil is able to control, or close to controlling, all areas of nuclear capability. The major ambition is to become a reliable exporter of enriched uranium in the near future." 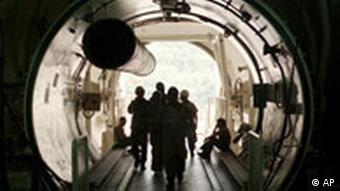 The advanced state of Brazil's nuclear industry raises the question of whether progress will stop there. Despite being a signatory to a number of relevant accords, Brazil's increased levels of uranium enrichment lend themselves to defense-related applications and technologies. Should it choose to, Brazil could become an even more powerful force on the continent, backed with an arsenal of atomic weapons.

However, Thiago de Aragao believes that Brazil can assert regional power through its nuclear program without developing weapons.

"The Brazilian society and the major stakeholders in Brazilian politics are still very firm on their positions that Brazil should not have a bomb," he said. "Brazil wants to tell the world: 'We have all the capability and technology to have a bomb, but we choose not to, and this should be seen as an example to follow.' Politically, Brazil could gain more with this behavior than from having an atomic bomb and causing problems with weaker allies."

Whether Dilma pursues a weapons program to go along with the potential expansion of civilian nuclear activities remains to be seen. But while South America currently remains A-bomb free - rumors of a secret weapons program in Argentina aside - experts believe that the continent will eventually be forced to accept a nuclear-armed power.

That may well be a long time in the future. But as one of the leaders in most arenas in South America, no-one would bet against Brazil taking the lead. The UN's nuclear watchdog has been refused full access

According to a report published by the Global Security.org think-tank, Brazil pursued a covert nuclear weapons program in the mid-1970s, siphoning off material and expertise from its growing civilian projects into parallel military programs. The pursuit of nuclear weapons accelerated in the 1980s in response to the suspected rival program in Argentina, before the secret operation was finally made public in 1988. The official stance at the time was that Brazil had failed to develop a weapon from its research.

To read more about Brazil's nuclear capacities, read below

In 1990, both Brazil and Argentina signed a "Declaration on Common Nuclear Policy," which pledged their commitment to an exclusively peaceful use of nuclear energy and established a "Common System for Accounting and Control of Nuclear Materials" between the two rivals.

However, last year's deal struck with France to jointly manufacture a nuclear-powered submarine has some analysts questioning whether Brazil is adhering to these treaties - especially as a number of the sites associated with the manufacture of the submarine have begun to cause controversy.

"What's worrying about Brazil at the moment is that it’s not allowing International Atomic Energy Agency (IAEA) inspectors to visit all the sites related to its submarine programme and that’s raising a lot of questions, bearing in mind their history of trying to start a weapons program," Anthony Seaboyer, a nuclear proliferation expert with the German Council for Foreign Relations, told Deutsche Welle.

"We know that technologically and financially, Brazil could pursue an arms program, but questions remain," Seaboyer said. "In reality, they have little to gain from pursuing the bomb. But if they did, we wouldn't hear about it until they had already succeeded, which makes the IAEA situation all the more worrying."

Brazil's rise in prominence and confidence is certainly beginning to have an effect on its regional rivals. Argentina's President Cristina Fernandez de Kirchner has already stated that her country's own nuclear program will not be allowed to trail behind Brazil's in the race for regional nuclear supremacy. 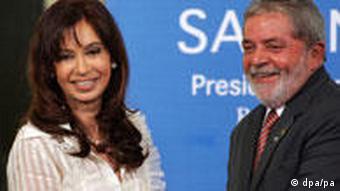 Suspicions remain that Buenos Aires may have some secret trump cards up its sleeve should the right moment in the power play arise. Brazil, the US and other Western states claim that the dictatorial junta which ruled Argentina during the1980s was actively pursuing a nuclear weapons program, and that it had required US intervention to prevent it developing into a live deterrent. Some military analysts believe a secret program is still active.

"A nuclear Brazil would divide Latin America, bringing regional integration to a stalemate," said Thiago de Aragao. "Its neighbors would not react well and could start a quest on their own for similar technology."

This wouldn't suit Brazil, since there are currently no strategic issues in dispute in the region, de Aragao said. Therefore the country has "absolutely no need" to flex its nuclear muscles. Currently in Latin America, Brazil can gain whatever it wants "without going down the nuclear road," he said.

Anthony Seaboyer believes that with Brazil the preeminent power on the continent at the moment, few of its rivals are currently able to mount a challenge.

"Argentina is way behind in financial terms," he said. "It's massively expensive to finance an arms program and Argentina just doesn't have the money. Argentina has also been very cooperative with the IAEA and has no problem with giving it full access so I think it is unlikely that Argentina would engage in any competition with Brazil."

As for a Latin American arms race, Seaboyer considers it "very unlikely" that one will begin at the moment, but added: "If it did happen, it would be a long way down the road."

Hopes are high that the deal brokered by Brazil and Turkey to turn Iran's controversial enriched uranium supplies into fuel rods outside the Islamic Republic will be a major step toward solving the on-going stand-off. (17.05.2010)

President Ahmadinejad's short visit to Brasilia is being seen as a calculated risk for Brazilian President Luiz Inacio Lula da Silva. But it promises significant boosts to both leaders. (23.11.2009)