A fire at a nightclub in southern Brazil has killed at least 231 people, most of whom died of smoke inhalation, according to officials. The blaze was reportedly sparked by a pyrotechnic display inside the club. 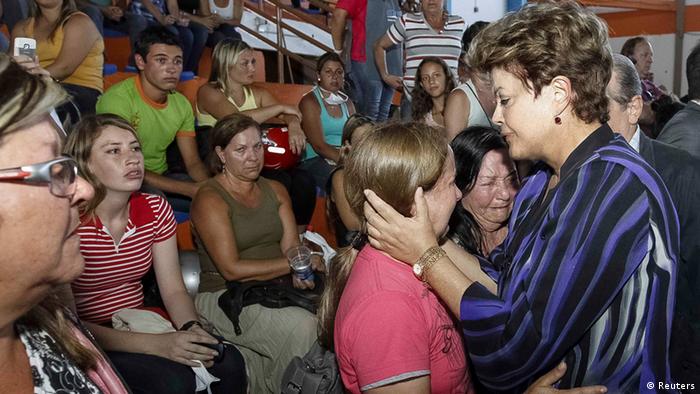 At least 231 people were killed with at least 116 more injured by a fire in the Kiss nightclub early Sunday in the southern city of Santa Maria, Brazil, according to officials. Brazil has declared three days of national mourning

Reports say the fire broke out early Sunday morning when the nightclub was hosting a university party featuring a rock band. The town is home to the Federal University of Santa Maria. Many of the victims are believed to have been students.

According to the private broadcaster Globo, sparks from the band's pyrotechnic display hit the soundproof foam on the ceiling and caught fire. Witnesses also reported the band's fireworks as having started the fire.

Santa Maria fire Chief Guido de Melo said the fire caused widespread panic and that many of the revellers were trampled on or died from smoke inhalation. He also said club security had blocked people from leaving which sparked a stampede.

A survivor of the blaze, Taynne Vendruscolo, told reporters, “Everyone was pushing and shoving. The fire started out small, but within seconds it exploded. Those who were close to the stage could not get out.”

A city's tragedy in Brazil

Local media reported that the nightclub's fire regulations permit expired in August 2011, citing the head of the state's fire department. The nightclub had a capacity of 2,000 people, however it was not immediately clear how many were present when the fire broke out.

Victims' bodies were taken to a local sports gymnasium. The initial death toll was given as 245, but Police Maj. Cleberson Braida said a new count of bodies brought to the gymnasium led to a lower count.

Brazilian President Dilma Rousseff (pictured above) cut short her visit to Chile, where she was attending a European and Latin American summit, in order to return home and oversee the response.

"I wanted to tell the people of our country and of Santa Maria that we are all together at this moment of sadness," said Rousseff before she departed.

"And we will overcome this, though the sadness will remain."

After the summit of the European Union and the Community of Latin American and Caribbean States (CELAC) closed, representatives held a minute of silence in honor of the victims of the tragedy in Santa Maria.

Santa Maria is 300 kilometers (187 miles) west of the state capital, Porto Alegre, one of the 2014 World Cup host cities.

Authorities have postponed an event called "500 Days until World Cup - 2014" set for Monday in the capital, Brasilia.

The tragedy is the world's deadliest such blaze in more than a decade.