Brazil is set to buy 34 used German anti-aircraft tanks. This is the latest in a series of deals to bolster the armed forces ahead of two major international sporting events – and a visit by the pope. 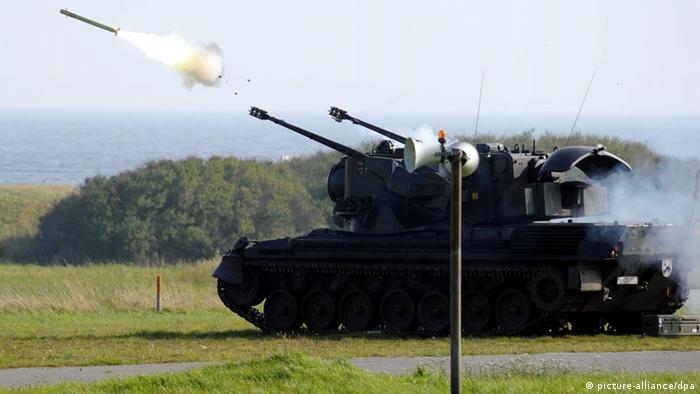 A Brazilian army statement confirmed on Friday the military's intention to buy 34 used anti-aircraft tanks from the German armed forces, but said the price was still being negotiated. The contract, which is to include provisions for training and maintenance, would be signed shortly.

The Brazilian army officer in command of anti-aircraft artillery, General Marcio Heise, told Globo's G1 online news service that the first eight tanks would arrive in June and be deployed in the capital, Brasilia.

This will be just before the football Confederations Cup kicks off on June 15. The event is a dress rehearsal for the FIFA soccer World Cup to be held in Brazil in 2014, which will be followed by the Summer Olympic Games in 2016.

And Pope Francis is due to arrive in Rio de Janeiro in July this year to celebrate the World Youth Day there.

Brazilis keen to improve internal security capabilities ahead of such major international events, which it fears may make it the target for terrorist attacks.

The German tanks are equipped with two 35 millimeter guns mounted on a rotating turret atop a Leopard 1 tank chassis. This model, the "Gepard 1A2," was phased out three years ago by the Bundeswehr and replaced with missile systems.

"It is very important to organize this show in Rio where major investments are made in the technological field," Amorim said during the opening on Tuesday.

Together with French partners, Brazil is currently building five new submarines, at least one of which is to be powered by a nuclear reactor.

Brazilian aircraft maker Embraer SA is in the process of developing new military transport planes. The company also won a contract to supply the US Air Force with aircraft to be used in Afghanistan.

Embraer is the world's third largest commercial aircraft manufacturer, behind Boeing of the United States and Europe's Airbus.