Berlin is in Brecht fever. As the crowning but ultimately disappointing event of the 50th anniversary of Brecht's death, a star-studded production of "The Threepenny Opera" opened in Berlin. 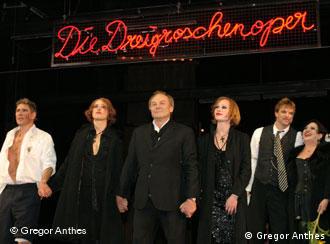 The fact that Brecht's "Threepenny Opera" opened at the Admiralspalast in Berlin was a little miracle in itself. The historic building from the beginning of the 20th century, hastily renovated by entrepreneur Falk Walter, was not deemed safe for public use until the day before the premiere, when city officials finally gave their seal of approval.

The media feverishly followed the will-they-or-won't-they drama of the most talked-about production of the year. In the end, all those wires ominously sticking out of the walls, blotches of paint, mops, buckets and vaguely disguised piles of rubble indicated that the building -- originally an ice rink and a luxury spa, which then, in the 1920s, became a theater -- was and still is a construction site, an unfinished project. Very much like Brecht's revolutionary dream. 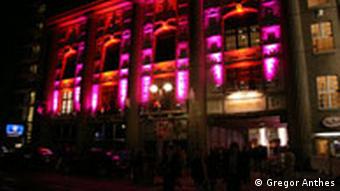 The Admiralspalast is still not fully renovated

The scent of undried paint -- known to cause either mild headaches or mild hallucinations, depending on your age and social status -- mixed well with the perfumes of Berlin society ladies, while one toilette sign in the theater foyer still pointed to a hole in the wall, covered by a simple wooden board.

This hole in the wall -- a real metaphoric nowhere -- would have been better suited as backdrop for Beckett's "Waiting for Godot." Estragon: "Shall we go?" Vladimir: "Let's go." Stage directions: "They don't move."

"At least, the stage is standing," said a bartender before the Saturday night performance, offering a glass of champagne to an elderly lady while performing an acrobatic balancing act over several crates of beer.

And while the stage was standing, the performance fell flat. With all the media hullabaloo leading up to the premiere, one was almost convinced it was going to be something special. 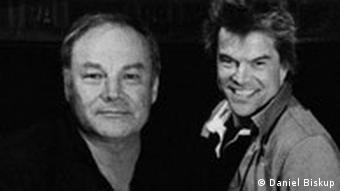 Gottfried John -- known to film buffs from several Fassbinder movies and to the rest of the universe as the evil Russian general Arkadii Grigorovich Ourumov from James Bond's Russian stunt in "Golden Eye" -- played Mr. Peachum.

Katrin Sass -- one of most popular actresses from former East Germany, who experienced a pan-German comeback with her touching appearance in the blockbuster hit "Good bye, Lenin" -- added quite a bit of slapstick cheekiness to the role of manipulative alcoholic Mrs. Peachum.

But most of the ensemble appeared helpless in an overly conventional production which lacked both the dramatic gusto and political audacity. Staging the play as an authentic costume drama set in London in the 1920s, Brandauer created a sluggish, outdated and all too reverent production which failed to excite let alone provoke.

A betrayal of sorts

Heiner Müller said in an interview once that "to use Brecht without criticizing him is to betray him." Turning "The Threepenny Opera" into a wax museum musical was one such betrayal. 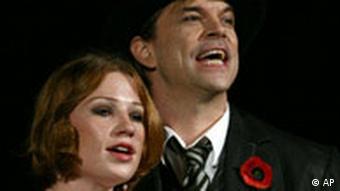 The highlight of the evening turned out to be Birgit Minichmayr's performance as Polly. The Austrian-born actress, who joined Berlin's Volksbühne theater in 2004, after earning her laurels at Vienna's Burgtheater, showed once again that she is one of the most exciting young German-speaking actresses today.

Her Polly was both loud and vulnerable, rebellious and scared. The otherworldly force of her voice, which assumes a subtle huskiness in the higher register, turned her rendering of Pirate Jenny's Song into a moment of chilling, spectral beauty.

The most contradictory -- and most Brechtian -- moment of the evening happened outside the theater. The elegant guests were greeted on arrival by a couple of homeless Berliners selling a special edition of their newspaper, Strassenfeger (Street Sweeper), entirely dedicated to the new production of "The Threepenny Opera." It is fascinating what kind of advertising a budget of 3.5 million euros ($4.5 million) can get you. 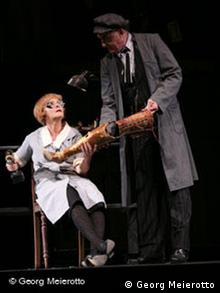 One after another, the well-off and the extremely well-off couples stopped at the theater entry to buy themselves a copy of Strassenfeger. After all, they all came to watch Brecht. It felt appropriate to get close to the masses. So they blinded the homeless with their pearly white teeth, and smiled like there was no tomorrow. It was a spectacle worth of Buñuel's "Discreet Charm of the Bourgeoise."

But those were exactly the kind of people, who -- under different, non-theatrical, non-Brechtian circumstances -- would have looked the other way. Luckily for them, they don't normally ride the subway that much.

Brecht in a post-revolutionary age

When Mack the Knife cried out his famous invective -- "What is robbing a bank when compared to founding a bank?" -- his words had to come out as petulant rather than subversive, especially to Deutsche Bank president Josef Ackermann, one of the most prominent guests at the premiere. 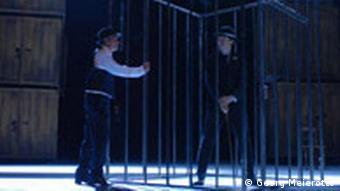 Brandauer's reading of Brecht was too tame and unexciting

What's more, "The Threepenny Opera" at the Admiralspalast was sponsored by Deutsche Bank -- a company that celebrated its record yields of 2.5 billion euros two years ago by firing more than 6,000 people, or every tenth employee.

Even to Brecht -- who was himself no stranger to wheelings and dealings of all sorts, and whose Austrian passport allowed him to dream his communist dream in East Berlin while keeping a bank account in Switzerland -- the happy artistic collective bringing together a punk rocker and a big banker would have seemed self-defeating.

Brecht said once that his work was "the swan song of the millennium." In Brandauer's no-risk production, Brecht's swan song died a muffled, echoless death.