Drawing inspiration from the long history of protest art, a group of guerrilla street artists have set about reclaiming urban space from advertisers and the big brands they represent. They call it "Brandalism." 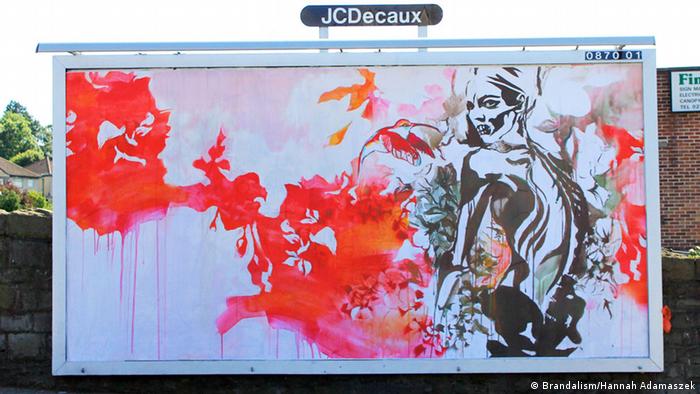 In five cities across the UK, artists have been busy reclaiming public space one billboard at a time.

By re-appropriating just 37 of the 100,000 billboards in the UK, the Brandalism project has caused quite a stir. The Outdoor Media Centre which represents outdoor advertisers has vowed to quash the project as quickly as possible.

But Brandalism activists have other ideas.

Simon Templeton and Joe Elan head the group behind the Brandalism project - one of the largest reclamations of outdoor advertising space in UK history.

They're using art as a form of self defence to "challenge the dominance and authority, and also the legitimacy of the advertising industry," Elan explained at the TEDx "Crossing Borders" conference in Berlin last week. 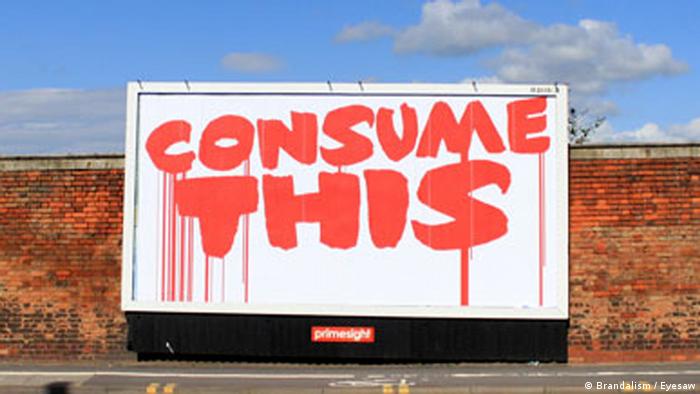 In your face: Eyesaw's "Consume This" in Bristol, UK

Doing battle in the urban arena

The group draws inspiration from a long history of social and artistic movements, including the Situationists, Dadaists, and Adbusters (known for their spoof advertisements), that aim to reclaim public space while disrupting consumer and capitalist culture.

"It's our public space as well. You have a choice when you read a magazine, turn on the television, or turn on the radio. You have an agency over that. You can choose whether you engage with it or not. On the internet you can block it out if you want. Whereas in the pubic realm there's no choice to opt out," Joe Elan said.

Templeton said that the guerrilla artworks they've installed on billboards around the UK aim to communicate honestly with the viewer, to get behind the mechanics of the industry and look at the broader affects of advertising on society.

Brandalism isn't about targeting any one brand in particular: it's about a critical assessment of the advertising industry as a whole. That includes "the environmental repercussions from this unchecked kind of consumerist frenzy that is encouraged," Elan said.

The 26 international artists involved in the Brandalism project tackle a range of issues from debt and propaganda, to climate change, consumer and cultural values.

UK artist Hannah Adamaszek's work addresses the issue of body image in relation to the widespread use of underweight models in advertising. Her work depicts an emaciated woman surrounded by splashes of pink and red impressions of beauty.

Adamaszek chose to take part in the Brandalism project because she was inspired by its aim to address the destructive role of the advertising industry on society. Like Elan and Templeton, she hopes that Brandalism can help initiate discussion and social change around a range of issues.

Another Brandalism artwork by Polyp was installed outside of Salford Gas Works in Manchester. Called "Earth Candle," it depicts the Earth melting.

Templeton argues that we need to look critically at consumer culture and its impact on the environment. "What is the end result of trying to have constant economic growth on a planet of finite resources?"

Aside from the environmental costs, Elan and Templeton assert that the constant push of advertisers to make us feel insecure and unfulfilled without the products we're encouraged to covet goes some way to explaining the riots which broke out in London and other cities across the UK in 2011.

During the riots, people from poor backgrounds smashed their way to the products they were unable to buy: sportswear, phones and designer fashion - products pasted on billboards around the estates but priced out of reach.

Though there's a more complicated discussion to be had around sponsorship and advertising, particularly in relation to the subsidizing of public services, Templeton believes that advertisers themselves are all too quick to wash their hands of any responsibility:

"Talk to advertisers and people that create these marketing campaigns and they'll say 'oh well it's not my fault, it's just my job' or 'advertising exists anyway and there's many different reasons why the riots happened,'" he said. 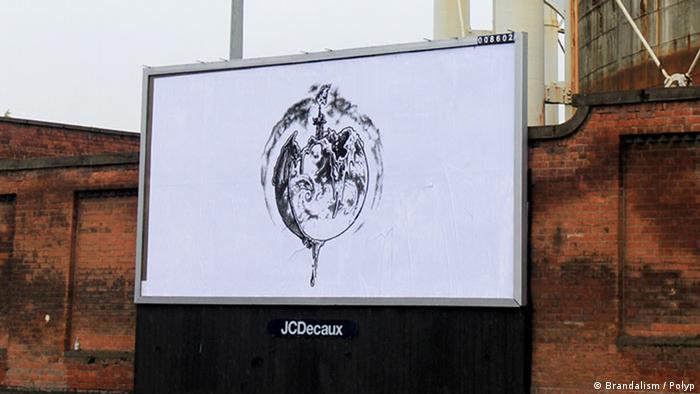 What would a city be like without billboards? It's difficult to imagine for most of us, but in 2007 the world's fourth largest city, Sao Paolo, passed the Clean City Law to combat water, sound, air and visual pollution.

In the process they took down 15,000 billboards, outdoor video screens and ads on buses, and issued fines totalling $8 million. Outdoor advertisers such as Clear Channel have fought the ban, but recent polls show that 70 percent of the city's inhabitants support it.

Sao Paolo also legalised public art, something which excites Elan and Templeton because they believe it brings a cultural vibrancy to the city. "It creates environments which people may find more inspiring or engaging and interesting," Elan said.

Could something like that happen in a European city? The activists behind Brandalism believe so.

"In recent Mayoral elections in the city of Bristol in England, some of the candidates were talking about limiting or reducing the amount of outdoor billboard space," Templeton said.

But big brands and their associates aren't too happy.

"We will continue to monitor the situation and safeguard advertisers' interests going forward. Advertisers should be reassured that we take this situation very seriously and are actively protecting their commercial interests," Mike Baker, chief executive from the Outdoor Media Centre said in a statement to the press.

In the meantime, Templeton has a word of warning for advertisers who are eyeing Brandalism as just another opportunity to cash in:

"If anyone's thinking out there 'ooh I could use this in my new marketing campaign' - forget it - because if you do, we'll find your adverts and take them down again."

Drawing attention to political grievances through public art is an idea that's gaining traction. Art group Voina has been campaigning in Russia. But like punk band Pussy Riot before them, they're now paying the price. (08.11.2012)

After years of legal battles, Berlin's famous Tacheles art squat has officially closed. It marks the end of an era of free art as artists search for new ateliers. (05.09.2012)