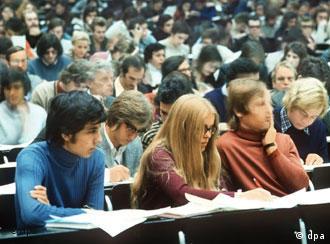 Educators are converging on Cologne for Europe's largest education and training trade fair, which opened Monday. While German participants familiarize themselves with new methods, theories and teaching aids, the fruits of their labors continue to abandon ship. After investing tens of thousands in education and training costs, Germany is losing its best qualified professionals to better paid positions elsewhere, economists complain. And the growing brain drain is compounding Germany's economic woes through the loss of skilled labor and human resources.

Nearly 118,000 people packed up and left the country in 2002 for jobs abroad, the German Statistical Office reported. Mathis Malchow is one of those who, along with his girlfriend, left Germany for better prospects abroad. "We just decided that we would try our luck in London, because it's the only city that has the potential for growth," the architect told Deutsche Welle.

Besides the young professionals and academics who leave Germany for work, young Germans who have completed vocational training also have good chances of finding a job abroad. Eva-Elisabeth Weber, a job counselor at the central employment agency in Bonn, noted that hoteliers, chefs, managers and mechanical engineers, in particular, have good career opportunities beyond Germany.

Each year the agency locates jobs for some 6,000 skilled laborers, professionals and managers outside of the country. It also tries to coax them back home when Germany needs them. "There are many doctors who we have found jobs for abroad, and now we have a shortage of qualified doctors here in Germany. We are now trying to encourage those German doctors and nurses spread across the European Union to come back," Weber said.

Every seventh person with a doctorate in science leaves Germany for the United States, The Scientist magazine has reported. Three of the four German Nobel Prize winners work in the United States. "The trouble is that we are losing our highest achievers," Christoph Anz of the Confederation of German Employers Associations told The Scientist. "We have reached the point where we will no longer be able to compete in the booming biotechnology sector."

Gerd Kempermann, a researcher in molecular medicine who has worked in the United States, says the work structure in other countries is often more attractive than in Germany. "The rules (in Germany) don't always fit everyone. When someone realizes that they don't fit into a certain formula then they begin to search for where their potential can be realized -- where employers look to see what they can offer good employees."

The most common complaints are that German research and development is under-funded and that institutes and universities are plagued by unwieldy bureaucracy. "American universities offer scientists better pay conditions, more time for research and less time spent teaching," said Peter Doermann, a research group leader at the Max Planck Institute for Molecular Plant Physiology near Berlin. Some estimates say that scientists can earn three times as much money working in the United States compared to Germany.

Harming those who stay

The brain drain can also hurt scientists working at home, Doermann told Deutsche Welle. "For me it's a problem of collaboration, since the major players are in the U.S. There are some Germans who were quite promising, and all of them went to the U.S. If you are below a critical number of people in a certain research area, you encounter problems applying for joint grants and European grants. The German Research Foundation insists on only German research scientists, and if people leave there aren't enough left to collaborate," he explained.

In an effort to reverse the trend, the German government last year said it would devote an extra €100 million ($127 million) over the next four years to stimulate research and development in biotechnology in addition to the €110 million already spent in the last three years. Announcing the package at the Biotechnology Day in Leipzig in October, Education and Research Minister Edelgard Bulmahn said the extra money would be directed to small- and medium-sized biotechnology companies.

Gerd Kempermann, for one, recently returned to Germany to work at a local research clinic, but not because the conditions were better he said. "They were for soft reasons, private reasons. One ends up returning to where one comes from," he explained.

Kempermann is optimistic that despite the critical unemployment situation in the country -- where 4.6 million people are registered jobless -- the wealth of talent should encourage the public and private sector to invest in the human capital. "I think that the motivation and the optimism will return quite quickly if a few fundamental conditions are changed. If the government would support general research then we could have a flourishing landscape in no time."

Despite tough times for science funding, the German government says it will invest €135 million in the country’s human genome research program. (Nov. 1, 2003)

Are German Universities Losing Their Luster?

Chancellor Schröder wants to reform the education system this year and the media is awash with talk of “elite universities.” But many are already in dire straits, a far cry from the country’s legendary academic yore. (Jan. 8, 2004)

Spoiler: You probably won't be able to live forever, even if you want to. How about settling for a life free from age-related ailments like Alzheimer's or arthritis instead?