At the annual RoboCup competition, held earlier this month in Istanbul, researchers from the University of Bonn were number one in the soccer teen-size class, and for automated domestic work. 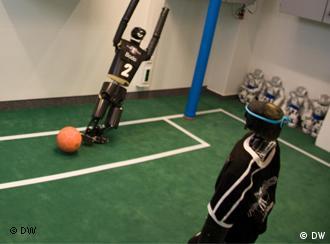 Bodo and Dynaped took home the championship in Istanbul

Most soccer players train at a local field, or perhaps a stadium. But Bodo and Dynaped get their workout at an inconspicuous office at the University of Bonn.

Instead of a soccer field, their training ground is half-computer lab, half-miniature artificial turf soccer field, compete with line markings.

Earlier this month, these two robots defated all-comers in the teen-size division of RoboCup, an annual robotics competition that pits 400 teams from around the globe against each other. Each division has slightly different rules and field dimensions - the teen-size class is designed for humanoid robots that are about the size, as the name implies, of teenagers.

Bonn took the title in the teen-size class for the third year in a row at the competition held in Istanbul earlier this month. Another University of Bonn team also took the championship in the @Home competition, where teams compete to build robots that can handle domestic tasks, like cooking.

Robot soccer is not quite like human soccer – a match lasts only 20 minutes and the team consists not of 11, but rather two players: a striker and a goalkeeper.

Each teen-size robot is about one meter (three feet) tall, and although they are humanoid robots, their movements remain jerky and mechanical - buzzing and rumbling sounds fill the air. Other divisions, such as the mid-size class, are cone-shaped robots that scoot around on wheels rather than legs.

Just like over-involved human coaches, the robots are not left completely unattended. During training sessions and competitions, the roboticists are intensely tracking their movements and behavior on laptops, analyzing ways to improve its processing and reaction time.

However, during all levels of the RoboCup competition, humans are not allowed to intervene during play - the robots must play entirely on their own. The RoboCup Federation's stated goal is to have an all-robot team defeat a human world champion team by 2050. 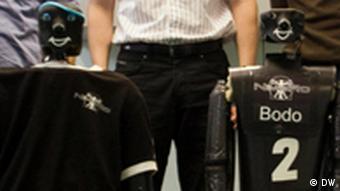 Bodo, Dynaped and their human coaches perfect their game at the University of Bonn

"They played very reliably and [had a] 'gentleman-style,' as I like to call it," said Matthias Nieuwenhuisen, a University of Bonn doctoral student in computer science, who worked on the two-robot team.

"They managed not to bump into opponents aggressively, but they take the ball away from them gracefully without touching them and that's a very nice performance," he told Deutsche Welle.

RoboCup researchers globally say that beyond sheer enjoyment, that there is an ultimate, more practical goal to their work.

"Robots in mass production make the same movement a thousand times a day," said Sven Behnke, a professor of computer science at the University of Bonn. "We are interested in cognitive robots that perceive their environment, make their own decisions and then move based on the situation."

By using the lens of soccer, which has a distinct and clearly defined set of rules and an end goal, engineers hope to be able to better understand how to get robots to react to a constantly changing environment.

Beyond the football pitch, though, another dynamic situation with a bit more immediate practical applications might be a home environment.

World champions in robotic housekeeping, too

This year, Cosero – which is short for "cognitive service robot" – took home the top prize in the housekeeping competition, known as RoboCup @Home. Cosero is a domestic aid and is currently programmed to carry heavy objects and perform simple chores, like setting a breakfast table.

The droid wowed the RoboCup judging panel with his ability to prepare an omelette: first by scanning the kitchen for a bottle containing prepared egg batter, then pouring the eggs into a frying pan, and finally switching on a hot plate with his gripper-like hands. 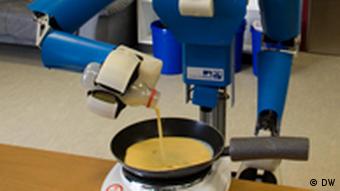 Cosero is designed to set a dining table, and cook breakfast

While the omelette is cooking, Cosero even throws the empty bottle in the bin, all the while commenting on what he is doing in his automated voice.

"So far, so good," he says in a synthetic male voice. "It should be ready when he gets back from the shower."

The man he thinks is in the shower is his designer, Jörg Stückler, another Bonn graduate student.

"We look at how it can cooperate with humans, how it perceives objects, how it can actually grasp and manipulate them," Stückler told Deutsche Welle.

While affordable domestic robots that can whip up a decent omlette may be a long ways off, Behnke added that roboticists around the world are making progress, adding that in a few years time, robots may enable handicapped or elderly people to live longer and more independently in their own homes.

"With regards to the complexity of the tasks and the perception of the world, humans are now way superior to robots," he said. "And our goal is to make this gap a bit smaller."

Japan says it is considering an offer from German Chancellor Angela Merkel to send remote-controlled robots to help clean up and repair earthquake and tsunami damage at the Fukushima nuclear plant. (31.03.2011)

RoboEarth's Internet for robots allows them to learn from each other

From its humble roots as an idea to coordinate a team of robotic football players, European researchers have created an Internet for robots - a way for them to share information across geographic divides. (22.02.2011)

Pi4 Robotics hopes to use this new robot to bring back manufacturing jobs to Germany, as its designed to work on inspection tasks along an assembly line, and show simple emotions visually if it detects a mistake. (30.12.2010)