Bones found in Death Valley might belong to German tourists | Germany | News and in-depth reporting from Berlin and beyond | DW | 15.11.2009

Bones found in Death Valley might belong to German tourists

Authorities in California believe the skeletal remains could belong to a Dresden couple and their children, who disappeared in July 1996. 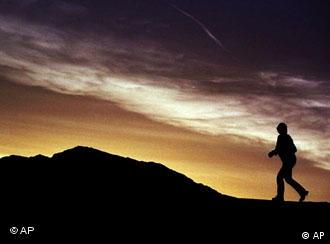 Death Valley is a popular - and dangerous - tourist spot

It's been 13 years since Cornelia Meyer, her 4-year-old son Max, her boyfriend Egbert Rimkus and his 10-year-old son Georg Weber disappeared into the shimmering heat of a Death Valley summer. They were on vacation, visiting Los Angeles and Las Vegas before making the drive to the desert.

Two off-duty search and rescue workers were hiking in the area when they discovered bones and personal papers from one of the missing persons. The site is several miles from where searchers found the family's rented minivan months after their disappearance.

Carma Roper, a spokeswoman for the county sheriff, said authorities were "fairly certain" the remains were those of at least one of the group, although formally identifying them could take a while. The cause of death has not yet been determined.

"At this point, it's being handled like a criminal investigation... but there is no evidence of foul play at this point," Roper said.

The family had arrived in the States at the beginning of July, and checked out of a Las Vegas hotel room on July 22, arriving at Death Valley National Park the same day. They bought an informational booklet at the visitors' center and apparently stayed there overnight.

The next day, they drove down a dirt road into a more remote area. The heat that week reached 120 degrees Fahrenheit (49 degrees Celsius). Death Valley is the hottest and driest location in North America.

The last trace of the visitors had been a note, scribbled in German, that the family signed in a guest book at an abandoned mining camp. Dated July 23, it mentioned they would be going through "the pass" - possibly a reference to a nearby trail that crosses the mountains on the park's southwestern border.

On October 23, 1996, searchers found their rented Plymouth Voyager, stuck in some sand off Anvil Spring Canyon, a roadless area far off the tourist track. Investigators believe that it had been driven for about two miles before stopping - despite having four flat tires.

Inside were rolls of exposed film, sleeping bags, empty gallon water bottles, the booklet the family purchased at the visitors’ center, and an American flag which apparently had been taken from a stone cabin five miles away. There were no identification papers and no tracks around the vehicle. About a quarter mile away, an empty beer bottle was found that matched others in the van.

German museum of death anything but morbid

Despite its somber content, the Museum of Sepulchral Culture, in Kassel, Germany, is housed in a bright, airy space - a good choice for a museum that looks at the connections between death, dying and creativity. (01.11.2009)