Two journalists and their driver had been confirmed dead by authorities in Ecuador. A two-month binational search ended with the discovery of the bodies in shallow graves on the Colombian side of the border. 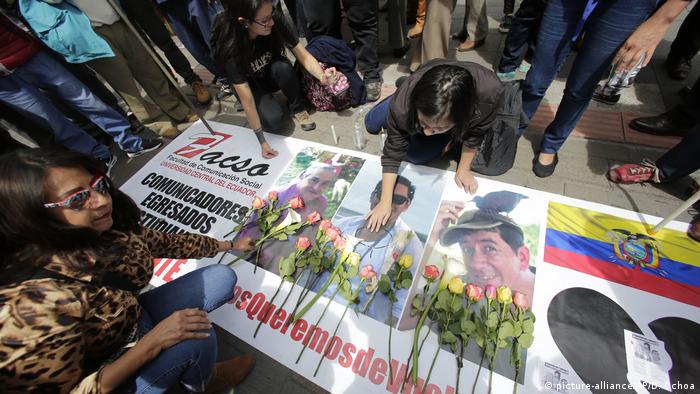 Colombian Foreign Minister Maria Angela Holguin confirmed on Friday that three bodies found in a heavily forested area in southern Colombia were those of two slain Ecuadorian journalists and their driver.

Javier Ortega, 32, photographer Paul Rivas, 45, and their 60-year-old driver Efrain Segarra were employed by Ecuador's influential newspaper El Comercio. They were investigating an uptick in violence along the border between Colombia and Ecuador when they were kidnapped on March 26.

Experts have said the border zone, which is covered with dense jungle and intersected by rivers that empty out into the Pacific, has become a hub of drug traffickers.

The journalists were said to have been captured by Ecuadorian guerrilla leader Walter Patricio Artizala, known as Guacho, who was once a member in the now-defunct FARC movement for 15 years.

Artizala now heads the Oliver Sinisterra Front and engages in criminal activities along the border such as extortion, kidnapping and drug-trafficking.

Bodies not meant to be found

The president of Ecuador, Lenin Moreno, informed the nation on April 13 that the journalists had been killed by the group after rebels failed to provide proof of life. This set off a wide search by both countries to locate their bodies.

Authorities found the bodies buried in shallow graves, in a jungle area. But before they could get to them, police had to defuse seven different explosives that had been placed at the scene.

Colombian Minister of Defense said it was clear to authorities that the journalists' murderers "buried their bodies in such a way so that they would never be found."

A fourth body was found on the scene that has not yet been identified, but Colombian newspaper El Tiempo posited that the man could have also been a member of the renegade guerrilla group.

The death toll for journalists dropped in 2016, but the number of detained journalists has risen. According to Reporters Without Borders, Turkey has turned into the "world's biggest prison for the media profession." (19.12.2016)