Blatter 'being investigated' by FBI: sources

The New York Times and ABC News, citing sources familiar with the FIFA corruption case, have reported that FIFA head Sepp Blatter is being investigated by the Federal Bureau of Investigation and US prosecutors. 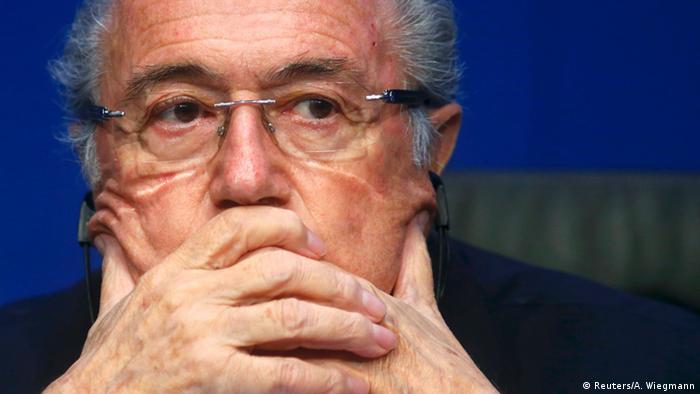 Late Tuesday, a source who spoke on condition of anonymity told Reuters that Blatter is being investigated by US prosecutors and the Federal Bureau of Investigation. An FBI spokesman has declined comment.

The Reuters news agency was not immediately able to confirm the report. Blatter has not been charged with any wrongdoing.

The FIFA head shook the soccer world on Tuesday by unexpectedly saying he would step down as president, just four days after winning re-election.

Blatter's decision to step down was welcomed by his most prominent critics.

An election to choose a new president would be held as soon as possible, said Blatter, although a FIFA official said it would probably not take place until at least December. 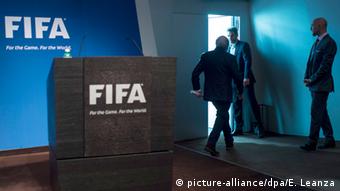 Blatter announced his decision to step down earlier on Tuesday

Blatter, 79, announced his decision to step down at a hastily arranged news conference in Zurich, six days after police raided a hotel in the city and arrested several FIFA officials.

"FIFA needs profound restructuring," said Blatter, a Swiss national who has been a major figure at FIFA for decades.

"I decided to stand again to be elected because I was convinced it was the best option for football," he said. "Although the members of FIFA gave me a new mandate, this mandate does not seem to be supported by everyone in the world."

The investigation focused in on Blatter on Tuesday, when FIFA denied that Blatter's right-hand man, Secretary General Jerome Valcke, had been implicated in a $10-million (8.9-million-euro) bribe payment relating to the 2010 World Cup in South Africa, which is at the heart of the US case.

FIFA President Sepp Blatter has announced in Zurich that he intends to resign, just four days after being re-elected to a fifth term amid a corruption scandal. (02.06.2015)

As it happened: Blatter's resignation

Sepp Blatter has announced his intention to step down as FIFA president. What are football's leading figures saying? What comes next for FIFA? Check the reaction on our blog. (02.06.2015)

FIFA has denied that anyone now in senior management was involved in a payment to indicted former Vice President Jack Warner. This followed a newspaper report that Secretary-General Jerome Valcke had made the payment. (02.06.2015)

Opinion: A good day for football

Sepp Blatter's sudden decision to step down leaves many open questions, but finally FIFA have the chance to answer them, says DW's Joscha Weber. (02.06.2015)

At the same time, a letter addressed to Valcke from the South African Football Association was published outlining the transaction.

It was only hours later that FIFA called the emergency news conference and Blatter announced his decision.

Reactions from around the world of football have been coming in. "It was a difficult decision, a brave decision and the right decision," said Michel Platini, head of the European football federation and a former French international player. Platini is a favorite to succeed Blatter as FIFA president.

Jordan's Prince Ali bin Al Hussein, who stood against Blatter in the latest election but withdrew after gaining 73 votes to Blatter's 133 in the first round of last Friday's vote, stopped short of confirming that he would run again.

When asked if there should be a fresh start at FIFA, he told Britain's Channel 4 News, "I'm willing to help."

Greg Dyke, chairman of the English Football Association and one of Blatter's most outspoken critics, said it was "good news for world football." He did, however, question Blatter's motive.

"Who got him? Who shot him? he asked. "I don't believe he went for any sort of moral basis, so something has happened between then and now which means he has to resign." 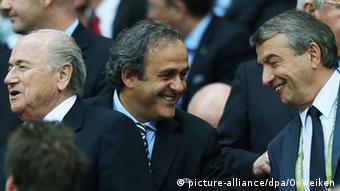 Platini (center) is a favorite to succeed Blatter as FIFA president

Blatter's decision to step down was, according to Russian Sports Minister Vitaly Mutko, "courageous" and would help prevent a split in FIFA.

"Today's news marks a step in the right direction on FIFA's path to establish and follow transparent compliance standards in everything they do," Adidas said.

FIFA and the world of soccer were shocked last week by the announcement of a US investigation into alleged widespread financial wrongdoing stretching back more than two decades.

Swiss authorities have also started their own criminal probe into the awarding of the 2018 and 2022 World Cups to Russia and Qatar, respectively.