Black market is corrupting efforts to save tuna, report says | Environment| All topics from climate change to conservation | DW | 09.11.2010

Black market is corrupting efforts to save tuna, report says

A team of investigative reporters has revealed a flourishing illicit trade in bluefin tuna. After months of digging, their probe suggests governments and regulators have willingly turned a blind eye to the problem. 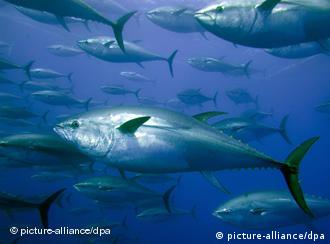 It is no secret that the past decade has seen sushi gain popularity in the Western world, but the methods for feeding this appetite have been kept fairly well hidden. Until now.

In a report detailing the findings of its seven-month long probe into the business of bluefin tuna fishing, the International Consortium of Investigative Journalists (ICIJ) has unveiled a culture of over-exploitation, tacitly approved by government authorities.

The report details systematic over-fishing, falsely reported catch volumes, ignored bans of spotter planes to track down schools of tuna and illegal sales of national quotas from one vessel to another.

All told, the investigation paints a bleak picture in which thousands of tons of fish were illegally hauled between 1998 and 2007 - as many as one in every three bluefin tuna may have been caught illegally during this period.

The report also unveils a complex network of fishing fleets, farms, ministries and distributors from countries such as France, Spain, Italy, Turkey and Japan involved in the creation of a flourishing black market trade.

The World Wide Fund for Nature (WWF) said the inquiry had confirmed its repeated warnings of widespread illegalities.

"No consumer, no business, no government can be sure they are dealing with responsibly caught and traded bluefin tuna," Sergi Tudela, head of fisheries at WWF Mediterranean said in a statement. "The whole chain is tarnished."

Parallels to the drug trade 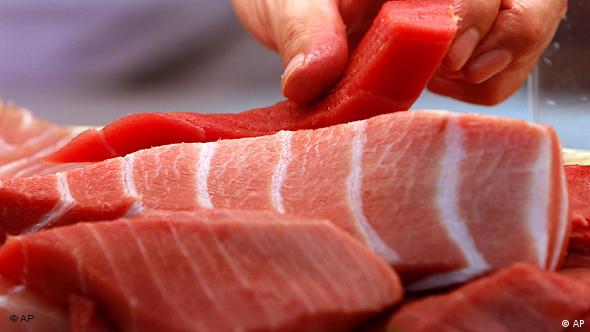 Quotas for tuna are being flouted and authorities are looking away, investigators say.

Eastern Atlantic bluefin tuna are a catch in more than one sense of the word.

As marine biologist, Daniel Pauly told the ICIJ, the promise of a slice of such wealth is too enticing for many to resist.

"Fisheries are one of the most criminalized sectors in the world," Pauly said. "This generates so much money that it's like drugs."

While mostly taking aim at suppliers and the governments that turned a blind eye to their exporters' behaviour, the report also reveals how Japanese dealers evaded tuna quotas by importing tuna as another species of fish, only to re-label them as tuna at market.

As the demand for the fish has grown, the industry has evolved in an increasingly detrimental way.

Tuna farms have sprung up throughout the Mediterranean, fishermen regularly plunder stocks in spawning areas and more boats – often subsidised at taxpayers' expense – have been put to sea. 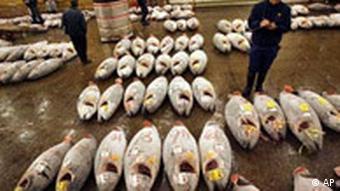 Much of the demand for tuna stems from Japan, though fishing occurs internationally

The report singles out the burgeoning practice of purse-seining - in which entire schools of fish are encircled by vast nets and dragged to farms to be harvested.

As a consequence, numbers of bluefin tuna, which play a crucial role at the top of the marine food chain, have plummeted by almost three quarters over the past four decades, while the size of the average captured bluefin tuna has almost halved.

"If we want to continue being able to fish bluefin tuna at all, we need to backtrack 20 years," Gemma Parkes, a spokeswoman for WWF Mediterranean, told Deutsche Welle.

The extent of the problem first surfaced in 2007 when France was revealed to have caught almost twice the quota it is allowed under the International Commission for the Conservation of the Atlantic Tunas (ICCAT) – the tuna fishing industry's watchdog.

The fishermen involved in the case were charged, and the regulatory body responded by introducing a new system, known as the Bluefin Tuna Catch Document (BCD), to help monitor catch sizes.

But the team of investigative reporters at the ICIJ says this system is full of so many holes that the data it gathers is practically useless. 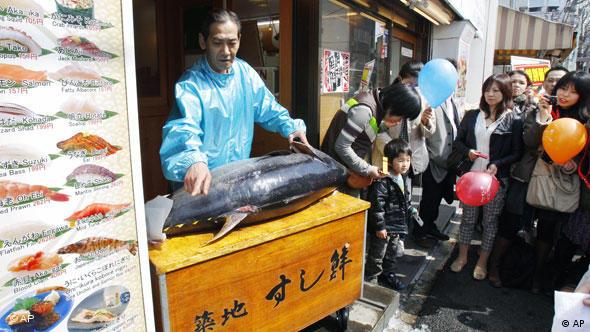 A smaller specimen just minutes away from becoming sushi

This week, the ICCAT commission is meeting in Paris to consider the current situation and find solutions. Exactly what shape these could take is far from clear, but Parkes says the answers are simple.

"We are pushing for quotas to be cut from 13,500 to between zero and 6,000 tons, for a phasing out of purse-seining and the establishment of 'no fishing zones' in spawning areas."

To lend weight to its demands, the WWF has gathered the support of businesses and restaurants that have agreed to remove bluefin tuna from their shelves and menus until the stocks have had a chance to replenish.

Exactly when that might be, nobody can tell, but Parkes insists that the WWF's suggestions would at the very least give the coveted species a much-needed break.

"There has been a depressingly widespread lack of control and respect for rules," Parkes said. "But these rules would be so clear cut that they would be easy to police."

A possible ban on sales of bluefin tuna is being considered at an international conference on trade in endangered species. The EU has joined the US and others to back a ban in the face of opposition from Asia. (17.03.2010)

Experts call for increased efforts to save coral reefs

The survival of coral reefs, the richest ecosystems in the ocean, depends both on local communities acting to prevent degradation and the international community altering its behavior. (11.10.2010)

Germany's Wadden Sea National Park, along the North Sea coast, turned 25 this month. As the world struggles with agreements to reverse biodiversity loss, the Wadden Sea shines as an example of transnational conservation. (25.10.2010)