Bird-Flu Find Results in Germany′s Biggest Bird Cull Ever | Germany | News and in-depth reporting from Berlin and beyond | DW | 26.08.2007

German health officials slaughtered 160,000 geese over the weekend after the deadly H5N1 bird-flu virus was found in a poultry farm near the city of Erlangen. The cull was ordered after 400 geese were found dead. 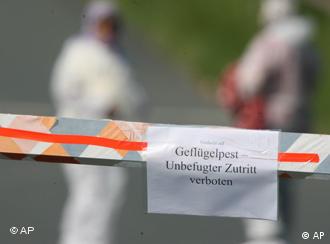 An exclusion zone was set up around the farm

A team of eight vets and poultry workers at the farm in Wachenroth, Bavaria, started what officials called the biggest ever culling operation in Germany late on Saturday. The birds were placed in three large containers where they were either gassed or electrocuted, officials said after the operation ended on Sunday afternoon.

Tests by the Friedrich Loeffler Institute of Veterinary Medicine had found the lethal strain of the virus in five of the birds.

A three-kilometer exclusion zone was set up around the farm, near the city of Erlangen which is about 200 kilometers (120 miles) north of Munich, as officials began tracking down the cause of the infection. Initial reports said the infected animals came from another poultry farm in the northern state of Lower Saxony, but this was later denied. 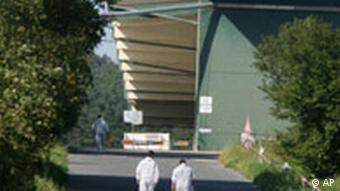 "We have not been able to pinpoint the source of outbreak," said Bavarian Health Secretary Otmar Bernhard. Experts are expected to keep trying to determine how the virus entered the farm.

The H5N1 strain of avian influenza has killed nearly 200 people in recent years, mainly through direct contact with poultry. Most of the victims have been in Asia. There have been no human deaths from bird flu in Europe, where outbreaks were reported recently in several countries, including Germany and the Czech Republic.

Bird flu hit wild birds and some domestic poultry in other parts of Germany this year. Wild birds can infect domesticated birds with the highly pathogenic strain and it is feared that it could mutate into a strain that could be transmitted among humans.

Germany has raised its bird flu risk assessment level after it was reported that 38 new cases of the deadly H5N1 strain were discovered in the country's east. France also reported new cases and upped its own alert. (06.07.2007)

The deadly strain of the bird flu virus has resurfaced in Germany in at least three birds the state of Bavaria. They are Germany's first confirmed cases this year. (24.06.2007)

The Return of Bird Flu Has Europe on Alert

As British authorities said they were nearly finished gassing some 160,000 birds on Monday, officials around Europe were concerned the potentially lethal H5N1 strain of bird flu could spread across the continent. (05.02.2007)