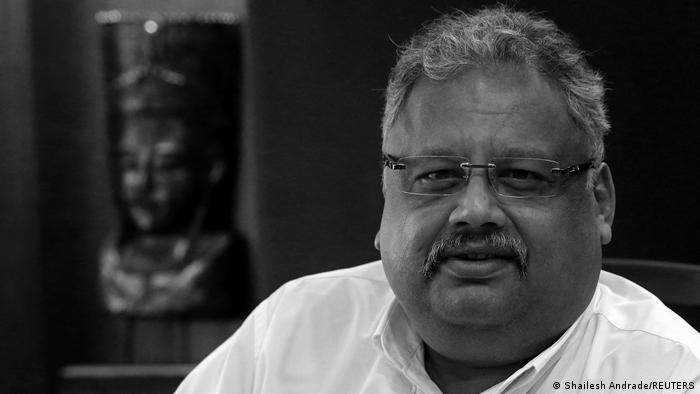 Days before his death, the billionaire investor told local media that India's economy was "entering a golden age"

Jhunjhunwala had built up an estimated net worth of $6 billion ($6.1 billion), thanks in part to significant holdings in more than 30 Indian blue chip stocks.

The cause of death was not immediately announced, although local media said he had suffered from various health issues.

Who was Rakesh Jhunjhunwala?

The "Big Bull of Dalal Street" — the Wall Street of Mumbai — started his career as a​​​​ chartered accountant from the desert state of Rajasthan.

He started dabbling in stocks while in college, starting off with a capital of just 5,000 rupees (€61, $63), and went on to manage the asset management firm, RARE Enterprises.

As Jhunjhunwala's net worth steadily rose, he became one of India's richest men with investments in some of the country's biggest companies, including those run by Tata Group, one of India's largest conglomerates.

Jhunjhunwala appeared last week at the launch of India's ultra-low-cost airline Akasa Air, which he had backed to the tune of $35 million for an estimated 40% stake.

The investment raised eyebrows as India's aviation sector is already crowded and the billionaire had no experience in running an airline.

"We are deeply saddened," Akasa Air said in a statement. "We at Akasa cannot thank Mr. Jhunjhunwala enough for being an early believer in us and putting his trust and faith in us to build a world class airline," Indian Prime Minister Narendra Modi led tributes, tweeting that the business magnate was "indomitable. Full of life, witty and insightful, he leaves behind an indelible contribution to the financial world."

Finance Minister Nirmala Sitharaman called Jhunjhunwala a "leader in his own right" who strongly believed in India's strength and growth.

Uday Kotak, the chief executive of Kotak Mahindra and a friend from school days, said Jhunjhunwala was right to believe that "stock India was undervalued" and that he was "amazingly sharp in understanding financial markets."

N. Chandrasekaran, chairman of the Tata sons investment company said the veteran investor "believed in India and the sheer potential of the country. This conviction led him to consistently make bold decisions throughout his life and career."

"Mr. Jhunjhunwala’s passing is an irreparable loss and we extend our deep condolences to his family and friends."

Business bankers in the financial capital, who had interacted with Jhunjhunwala over his career said he had great communication skills that helped small investors to understand the stock market.

He is survived by his wife and three children.