Billie Holiday: the founding mother of jazz, on her 100th birthday

Adjectives such as "distinctive" and "authentic" just don’t go far enough. No one could interpret a song like Billie Holiday. Her influence on jazz can still be heard and felt today - 100 years after she was born. 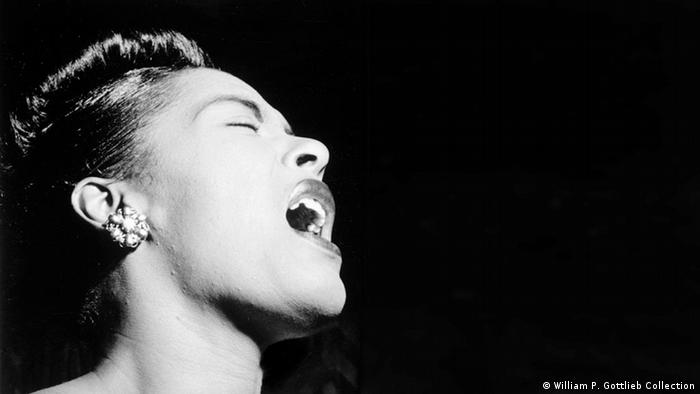 "She was just 17, a little bit overweight, completely beautiful, and an absolute unknown. She sang as though she had really lived."

That's how record producer John Hammond describes his first meeting with Billie Holiday. He first noticed her unmistakable voice in 1933 at a club in New York. Hammond invited up-and-coming jazz star Benny Goodman to hear her, and convinced him to invite her to a recording session for CBS.

This produced the first recordings of her singing "Riffin' the Scotch" and "Your Mother's Son-in-Law". Billie Holiday was by no means Hammond's only discovery; he went on to back artists such as Bob Dylan, Pete Seeger, and Bruce Springsteen.

Holiday had no musical training and a limited range. She couldn't read music, and sang mostly slow ballads. Her only influences were singer Bessie Smith and trumpeter Louis Armstrong, whom she heard on records played in the brothel where she worked. 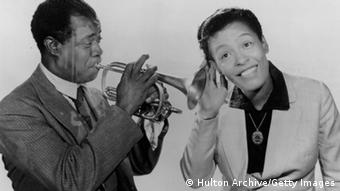 Billie Holiday with her idol Louis Armstrong, in the 1947 film "New Orleans"

Billie Holiday was born on April 7, 1915 in Philadelphia as Eleanora Fagan to teenage parents who never married. She grew up in Baltimore. Her father, Clarence Holiday, later became a successful jazz musician, but barely knew his daughter. Her mother, Sadie Fagan, largely neglected her. Eleanora often skipped school and was sent to live in a home for truents, where she was raped at age 10.

Later, she worked as a prostitute in Harlem, New York. Hers is a spotted history, with stage triumphs landing her appearances at Carnegie Hall, a jazz evening with the Metropolitan Opera, and a European tour - mingling with two failed marriages and two prison sentences for drug charges. She died at the age of 44 from cirrhosis of the liver at a New York hospital, with police officers from a narcotics unit guarding her bed.

Holiday played with all the great jazz artists of her era. But the adoration of her millions of fans did not make her rich. Following her death, there was even an argument over who should pay for her tombstone.

An artist ahead of her time

Holiday had a short but incredibly productive life, with hundreds of recordings and innumerable performances. After making the rounds at the speakeasy clubs during the prohibition era, her career began to take off in 1935. During small group recording sessions with Teddy Wilson, a member of the Benny Goodman Trio, she was asked to interpret classics for the growing jukebox industry. The recordings had a limited success, said John Hammond.

"It was problematic with Billie. Musically, she was ahead of her time. The liberties she took with lyrics and melodies hardly endeared her to the then all-powerful music publishing houses. It was European music critics - not American ones - who first really began to appreciate Billie Holiday." 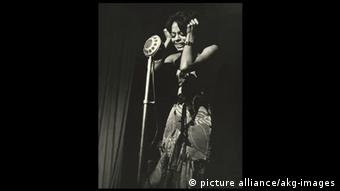 She described her own vocal technique in her 1956 autobiography "Lady Sings the Blues." "I don't think I'm singing. I feel like I'm playing a horn. I try to improvise like Les Young, like Louis Armstrong or someone else I admire. I hate straight singing. I have to change a tune to my way of singing it. That's all I know."

And that was enough. This singing that wasn't singing blended in the most subtle way with other artists who were improvising: from 1936 with Lester Young - who gave her the famous nickname of "Lady Day," from 1937 with Count Basie, and from 1938 with Artie Shaw.

Her triumphs were always diluted with a sizeable drop of bitterness. Like millions of other black people, Billie Holiday suffered from racial discrimination. Because of her lighter skin color, she had to be made up to look darker for an appearance with Count Basie. A "white" singer appearing with a black band would have been a scandal.

But Holiday also defied stereotypes. Her performances with Artie Shaw marked the first time a black woman sang with a white band. But Holiday was only allowed to use the back entrance to the stage and didn't eat with the other musicians. Her success proved unstoppable. Soon, she was appearing as "Billie Holiday and her Band." In 1947, she had a small role in a film with her idol, Louis Armstrong. But rather than playing herself, she played a maid.

Icon of the civil rights movement 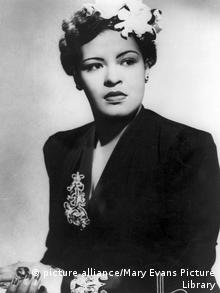 With "Strange Fruit," which Holiday began singing in 1939, she directly took issue with racism. Based on a poem by Abel Meeropol, the song was a damning indictment of the lynchings that regularly took place in the southern states. Columbia records thought the song was too risky; even producer John Hammond passed.

Commodore Records recorded the song, which became her biggest hit and made Holiday an icon of the American left and a social phenomenon. As a symbol of the African American civil rights movement, "Strange Fruit" was named Time magazine's song of the century.

Today, songs that were written or composed by Holiday such as "Lover Man," "Don't Explain" or "Long Gone Blues" remain as well known as they were during her short lifetime. But she is also known for her interpretation of many classics such as George Gershwin's "You Go to My Head" or "I Can't Get Started."

In addition to the white flowers that Lady Day wore in her hair, her subtle articulation and phrasing are her trademark. Even when her voice took on a rough edge in her later years, Billie Holiday never lost her rhythmic magic. She didn't sing on but rather slightly off the beat, embracing the rhythm rather than hitting it straight on, thereby lending it an immense tension. 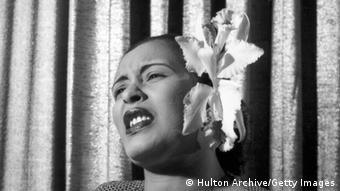 "Lady Day" with a white orchid in her hair

In addition to her technique, it was the intensity with which she sang that has made Billie Holiday a role model for countless other singers. The recipe, said Holiday, who lived such a difficult life, was easy. "Singing songs like 'The Man I Love' or 'Porgy' is no more work than sitting down and eating Chinese roast duck, and I love roast duck. I lived songs like these."

In 1973, American jazz critic Ralph Gleason put it as follows: "She was the greatest jazz singer of all time. Today, if you sing jazz and you are a woman, you sing some of Billie Holiday. There's no other way to do it." That still applies today.

Muhammad Salwa Aristotel was born without hands, but he didn't let this get in the way of learning how to play trumpet. His unique skill is now attracting attention.