German biathlete Evi Sachenbacher-Stehle has announced her retirement from the sport despite a reduced ban from competition following a positive doping test in Sochi. 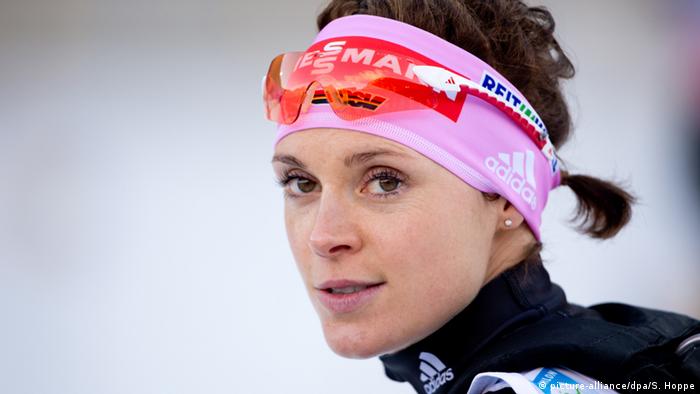 "I'm missing three months of training," Sachenbacher-Stehle told ARD in an exclusive interview. "The past few months have cost me a lot of strength. People haven't always treated me very well, either."

Sachenbacher-Stehle tested positive for a banned substance at the 2014 Winter Olympics in Sochi. She claimed that the suspect stimulant, methylhexanamin, came from a contaminated tea powder.

In the summer, Sachenbacher-Stehle was banned from competition by the International Biathlon Union for two years, retroactive to the Olympic competition where she tested positive on February 17.

Sachenbacher-Stehle took the case to the Court of Arbitration for Sport (CAS), which ruled earlier this month that she had no intent to dope when she took the tea.

"The ruling made it clear that I didn't intentionally dope, that I meant in no way to deceive," said Sachenbacher-Stehle, "but of course there was a positive test, and that will always cast a shadow."

The CAS reduced her ban to six months from February, meaning she was immediately eligible to compete again.

But, at age 34, Sachenbacher-Stehle decided instead that it was time to move on.

"It was really great [when the ruling came] but then of course the question: Why so late? Why did it take so long to make this ruling?" Sachenbacher-Stehle said. "If I had known this back in May, things would have surely been different. My decision would have been much different, but now it's November and too late for this season, and that's why my decision went the way it did."

Sachenbacher-Stehle said she no longer wanted to deal with the fallout of the doping case and how she was treated by some people, preferring to "lead a normal life."

At the start of the 2006 Winter Olympics in Turin, Sachenbacher-Stehle was handed a five-day suspension at the start due to an abnormally high level of hemoglobin in her blood.

German athletes who dope are due to come in for heavier punishment. The German government has drafted a new law that will even see those using performance-enhancing drugs in sport sent to prison. (12.11.2014)